I remember the day I saw Michael Clarke make his test debut five years back. From the very first moment he seemed different; he didn't murder, he didn't invade, he didn't plunder, he didn't ransack; he didn't even chisel or compose; he simply soared, and soared endlessly, and I couldn't help admiring even as he piled up a hundred on debut against us. It was like reading Jonathan Livingston Seagull for the first time; it was feeling the joy of flying high, fresh wind brushing against your bare skin, your eyes closed with an oddly orgasmic feeling of the vast endlessness engulfing your existence.

Murugun was like that. The film didn't simply exist on the screen; it soared. The joy was familiar; it was pure, it was unadulterated, it was the fresh essence that melted into your mouth the moment you dug your teeth into a freshly plucked apple. Yes, I had laughed out loud in the theatre at the top of my voice, loud enough to distract a couple of neighbours. Yes, I had rocked savagely in the seat (and I weigh close to a quintal) out of sheer glee at witnessing something so insanely grotesque. Yes, it was so good that I had clapped like a five-year old at his plastic machinegun. Yes, it was so stunning that I had spasms of laughter where every inch of my body responded to the insanity on the screen. Everything, right from the green-and-rani shirt of Murugun to the absurd, irrelevant handicapped character at the end, fell into place the way Ghosh (and we) wanted them to be.
What was Murugun like? Well, for starters, as the credits rolled, it said Quick Gun Murugun: Dr Rajendra Prasad. Hang on, DOCTOR RAJENDRA PRASAD? I mean, what was a name of that kind doing in this movie? Aren't such names supposed to be in history books or parliamentary elections? I mean, isn't this simply RIDICULOUS?
It continued unfolding. The storyline, as expected, was beautifully mindless; the theme, as expected, was blisfully non-existent; the action scenes, as expected, were mind-bogglingly dumb; it was an epic saga of incredible stupidity, and of pure fun, the way we'd want our worlds to be. Every minute made me realise that Shashanka Ghosh loved making this film, and enjoyed every aspect of the process, however miniscule.
Consider the yamdoot, for example; who takes our dead hero in a hideous translucent vehicle (oh, did I mention that though the yamdoot drives it himself to the corpse, the dead individual needs to drive him back?) to a place that resembles a Government office; where people get "sorted" into their various destinations; where apsaras are given sort of crash courses; and where Vinay Pathak, as C Gupta, decides the future of any given individual.
Consider the incredible action scene amongst the coconut trees at the Institute of Coconut Tree Climbing (Recognised) that also offers diploma in betelnut tree and palm tree. I mean, when did we see a gang of attackers so effortlessly random, so viciously focused, and at the same time, foolish enough to attack Murugun one by one (and that too, using coconuts, which our hero ducked effortlessly), and astonishingly slow in allowing Murugun to target them at leisure and get plucked off by his Quick Gun, one by one? You need to believe it to see it, honestly.
Consider Anna, the elder brother of Murugun, Shashanka Ghosh's own version of Mycroft Holmes. The moment the brothers meet they take out their respective guns (why was the brother carrying guns tucked under his belt, under his dhoti, when he was in his house, whereas he did not bother carrying them when he went out to work and was caught bare-handed by attackers when he came home?) and randomly shoot at objects, apparently decorative ones in the house, and Murugun's bhabhi has tears of joy in her eyes at the shooting prowess of the brothers. Some day I shall have to get my brother to do this with me, I'm sure my wife shall react the same way.
Consider Rowdy, MBA, for example, in my opinion the best character of the movie. IMDB told me he's called Raju Sundaram; we had seen him dance to Rukmini a decade and a half back; and Wikipedia told me that he's a brother of Prabhu Deva and Nagendra Prasad (the humma humma guy). But all that was irrelevant. What mattered was his incredible style; the way he walked; the way he shaked his head cracking his bones that only a professional choreographer can do; the way he talked; the way he uttered "sssssssuper" to the dosa; and above all, the YemBA YemBA chant that filled the theatre as he did anything of note on the screen. I hummed the chant for the rest of the week until my wife got mad; I converted the movie file to .mp3; got the twenty or so seconds cut from the audio file; and now the chant is my ringtone. It's incredible.
And then, there was Rambha; a few of my mates might remember that we had a (albeit verbal) fan club dedicated to her when we were doing our Master's. Rambha as Mango Dolly simply stunned me to the core; I cannot think of anyone who could've done more justice to the role; everything was perfect, right from serving curd rice to our hero to snapping parts of her own apparel to bandage his wounds to her anticipated death (ah, if a hero loves some other woman, isn't the second girl bound to die in the end?) in the hands of the curiously named Dr Django (note the rhyme with Mango) who had been hired as a foreign expert to create a Yay1 tiptop superdosa for Rice Plate's McDosa!
I can go on and on and on, but this is not what this blog is supposed to be about. Go and watch the movie, even if you're not a Clint Eastwood fan. Order masala dosa (make sure they don't give you a mutton dosa) and drain it with a tumbler of whisky once you're through. Quick Gun Murugun shall never be a blockbuster (it ran for just a week in Kolkata); it shall not win the Golden Globe; but who cares? As long as the neel gagan is my terrace and poora duniya is my watan, I'd watch it time and again to shove some oxygen into my soul, polluted by years of contamination of the city and its forced civilisation.
Mind it.
Puked by Abhishek Mukherjee at 13:14 2 comments:

Email ThisBlogThis!Share to TwitterShare to FacebookShare to Pinterest
Tags: Cinema 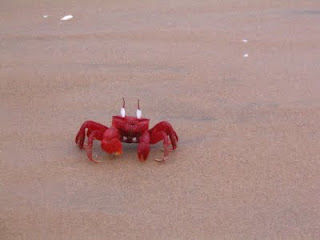 We had discussed Tajpur, somewhat casually, in our office a few months back. As it happens everywhere, we had some perpetually enthusiastic people to savour the charm of an alienated beach, but most of the others backed out. I suppose creature comforts mean a lot to most people, and they can't really be blamed for that.

Finally it was a group of six. We set out on a group of six in an air-conditioned Qualis (you see, we can go to a place without electricity, but air-conditioned transportation is a must...). Given a choice Ranadip would possibly arranged for a limousine with a performing DJ and a cohort of waitresses serving champagne and gourmet food, but we had decided to stick to a meagre budget.
After a halt (where I was asked to pose with a kangaroo; given the recent Ashes outcome I'm sure I'd have humiliated it had it not been a dustbin) we raced towards Tajpur. We passed Kolaghat, the power plant we've all read about; Nandigram, which we have fought over a million times over countless cups of tea; Mecheda, the telebhaja capital of the world; and finally we reached within five miles.
Things changed thereafter. The glorious asphalt gave way to puddle-clad ridiculous patches of lands that were supposed to be roads, but certainly weren't. We trudged along, and covered three miles in thirty-two minutes (Joyish can surely walk faster than that, albeit on flat dry land).
The rest was a routine. Lunch; unpacking; changing into beachwear (okay, Bengali beachwear); walking through another muddy track lined with innocent-looking trees (Ranadip, though, could've sworn that the trees reminded him of the most brutal of murder mysteries); and finally, reaching what seemed like a reasonably harmless patch of sea.
The first look was quite impressive. It was the usual brownish grey water you get in West Bengal beaches, possibly a by-product of millenia of dirt. We took a few steps forward, maybe half a kilometre likewise, towards the sea, occasionally diverted by a handful of blood-red, supremely active crabs.
And then it happened.
The initial feeling was that of a thousand needles piercing your raw, bare skins. Suddenly I felt like a humongous dartboard, and the very next moment I was somehow metamorphosed into some miniscule object, carelessly shoved away by some unforeseen, indomitable surreal force. It was something I've never experienced before - being ripped apart by a force as powerful as the most ruthless of tyrants. It was like nature's revenge on us, humanists, refusing to acknowledge her supremacy on the universe...
The entire surroundings transformed. We were engulfed in a seemingly white barrier of rain, mist and sand: haze reigned supreme; visibility was curtailed to zero; it was a suffocating, yet delightful feeling of being challenged by some invisible supreme authority, trying to emphasise its stronghold on us, mortals; it was a challenge from there, to fight back, to gnaw our trails back to our tents...
It never seemed to subside. It reminded me of the West Indian fast bowlers of the 1980s, who allowed you moments of breathing space, but never a significant respite of any kind. We groped through the white darkness; the route was possibly visible, but walking against the wind was an impossible task.
Tamal and Abhishek had clicked their shutters a million times. The spectacles were captured. The goosebumps weren't. I stood there, for hours, seemingly mesmerised by the arrogance of the storm and the rumble of the frothy water against the muddy beach.
The raindrops had turned horizontal by now. Coupled with the sand, they now feasted on whatever was left of our exposed skin; we walked back, our eyes looking at our feet, sometimes with our backs to the destination to avoid the cruel blows. But we proceeded; surely, if not slowly, towards our tents...
Everything after that had to be an anticlimax; even the humongous pomfrets and the divine prawns; even the tents, rocking by the remnants of the storm; even the fact that my Nokia 3110c started working after a few hours since water had seeped inside the LCD.
We returned next day. Home beckoned. Tajpur was left behind. The storm was not. The day reaped the storm inside me, if not all of us, possibly ready to erupt some day in future...
_______________________________________________________
Postscript: The storm had actually forced the local fishermen to come back; it had taken a solitary human life at Digha, a few miles away. But apart from the storm, Tajpur is a pretty nice to visit if roughing is fine with you. It's quite virgin yet, but the human impregnation is on its way, so if you want to catch it raw, don't leave it for too late.
Puked by Abhishek Mukherjee at 14:30 8 comments: