Chetan Bhagat is back, much to the joy of his fans and dismay of his critics, with his new masterpiece. It was expected that the title of the new book would contain a mere natural number, but Mr Bhagat had decided to take things to a different echelon by introducing a fraction: HALF.

This got me thinking: Chetan Bhagat, the doyen of Indian writing in the new millennium,  how does one predict the number the legend associates with his books?

I started off with the six numbers. Obviously 2020 skewed things significantly, but it was still a doable thing, thanks to Somnath's extraordinary knowledge of MS Excel (I cannot believe how much out of touch I am these days!). I decided not to complicate things and stick to a 6-degree polynomial instead.

As is evident, this has been skewed significantly by 2020. Let us try to fit a 6-degree polynomial and check the results.

But then, Revolution 4 would not have a similar impact, since few are acquainted with the goings-on in the year 4 AD. And, as we know, Mr Bhagat, being the Voice of Young India, does not believe in facts from ancient times. Young India can be quite impatient at times: they may end up losing their voice and charging him an outrageous invoice, as an outcome of which hawkers may end up not selling his books to unsuspecting auto-rickshaw commuters ("serious books", anyone?).

We know that history (and being respectful to others' sentiments) is not Mr Bhagat's forte. For example, in this article on The Times of India, he has hurt the crushed of many an honest cinema-lover, myself included. But that is another story, and Greatbong has done such a wonderful work of it that it is not worth another go. Most importantly, it is not the topic of this article.

The equation does not look too good (once again, accommodating 2020 had made a mess of it). Despite that, we will use it to predict the number Mr Bhagat will use in his upcoming book.

Before beginning, however, there are a few disclaimers I should make:


Note:
1. This is not the best possible (but perhaps the easiest) way.
2. I had not been taught to predict numbers used in book names at any level of my non-illustrious academic career.
3. The number will depend on the year of release.

We have already got the polynomial, but the curve looks abysmal. It will not require a mathematician to predict that it will take a headlong plunge as I cross 2014 and move into the zone of the relative unknown.

What to do, then? Will using logarithms help? Let us check.


This does not look too bad. Let us fit another polynomial now.

Not too bad, but as before, the dip is apparent. It does indeed seem that the number Mr Bhagat uses (if his new book comes out in 2015 or 2016) will be a very, very small value, almost close to zero. In fact, the later will it come out, the smaller the value.

There is nothing very wrong with this, though, given the fact that Mr Bhagat is an IITian and definitely has a penchant for numbers, big or small. Maybe the Voice of Youth would want to be remembered as The God of Small Things after his new book, which may hit the market sooner than we think. 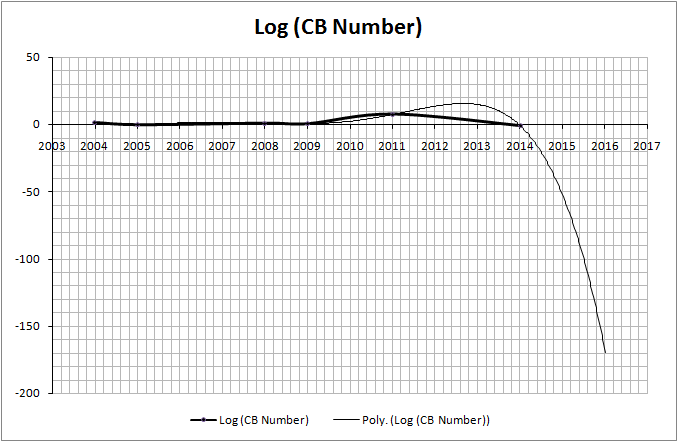 Not too promising for the highest-grossing author of our times, is it not? It is not as bad as it looks like, though, since we have been taking logs.

For people living in a domain too high for small numbers, this is a value that can be considered very, very close to zero. In other words, the name would contain the number 0.

I am not finished yet, though. Does the number 2020 not sound a bit off-track? What if Mr Bhagat did not want it to be part of the series? What if we drop the number and calculate the trend? The number is big enough — in the same way that Mr Bhagat himself is — to be considered an outlier. Let us check: 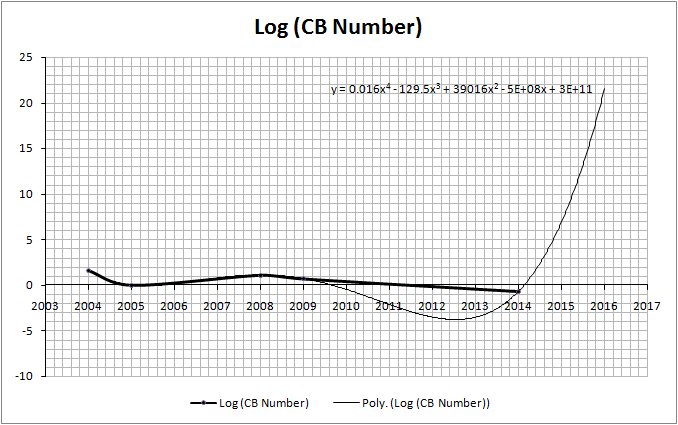 The value for 2015 now (yes, yes, I know there is no reason why I should consider a polynomial a best fit here) is
e^7
or
1096.633158
or approximately
1097, which seems a reasonable number to become a part of a book. One can only will hope it will make its way to the leagues of 1984, Farenheit 451, or One Hundred Years of Solitude. All these seem reasonable names for a book that, like its illustrious predecessors, will go on to change the face of the country, especially the youth.

Moral of the story?

If you include Revolution 2020, the future of the series is zero. In other words, if you think the books involve revolutionary material in the series, you may be headed for a huge zero.

So, what are your guesses for the name of the upcoming pathbreaker?

PS: I had felt helpless without access to SAS and R. Then I called Somnath, and he taught me a thing or two about MS Excel. A huge thanks to Somnath, without whom this post would have been delayed or, worse, not been written.
Puked by Abhishek Mukherjee at 03:07