It was ten minutes to tea. I was putting my daughter to sleep after telling her a couple of made-up stories. I was checking the score on my cellphone, and for whatever reason they weren't updating after 65.5 overs.

Then Somnath called. Somewhat bizarre, I thought. What might have prompted a call? What could have happened in that last ball? I mean, a pathetic long-hop hit for a six or something - but surely he wasn't calling for that? And why wasn't Cricinfo updating the score?

To quote Cricinfo, this was the case:
Oh dear, what's going on here? Morgan flicked it to deep square, where Praveen made a comical attempt at saving the ball, it looked funny but he actually did cut it off. The fielder thought it was four but it wasn't, the England batsmen thought it was four and by the time the throw came back in the batsmen were out their crease thinking it was tea. Off came the bails and now India are appealing for a run out! It could be out, should be even? That's pretty careless of the batsmen but had the umpires called tea? This Test has had everything, what can the umpires do here?


I saw the replays. I got furious at Ganguly's criticisms of Dhoni during the tea-interval. Of course Bell was out. Of course he was. Why was Ganguly, of all people, criticising Dhoni, who was already under severe blows by the British media?

Then the unthinkable happened. Bell walked out to bat. Apparently Flower and Strauss had walked up to the Indian dressing room, and had asked Dhoni to withdraw his decision (Diptakirti had pointed out that had Ganguly been the captain, he'd have made them wait forever outside the dressing room), and Dhoni had consented.

My initial reaction was that of anger. We had toiled hard for two sessions and could not dislodge Bell. When we had finally managed to get him, how can he let him off this easily? We had not done anything illegal, so why undo it? It shall possibly cost us the test, the series, and bigger than everything, the hard-earned no. 1 spot.

But when the anger subsided, I realised. I suppose my initial anger can be forgiven: after all, it took Dhoni all of the tea-interval to realise the act as well.

The past decade was ruled by a bunch of very competitive cricketers from Australia. They were competitive, they were professional, they were ruthless. They were, in the opinion of many, one of the best sides the world has ever seen, if not the best. They were an awesome pack.

We are a lesser team. We're not big fish - it's just a case of a smaller pond. But, unlike them, we are aware of the responsibilities of being the number one side in the world. We do realise that there are things more important than winning: it's not only about winning matches; it's also about acting as role models to the world.

We have potentially lost a test, the series and the number one slot (maybe we might be able to salvage one or two of them, but it seems quite improbable). What we have managed to do, however, is help cricket emerge as the undisputed champion in the global sport supremacy.

We might have got Bell out. It would have been legal, of course. But it would not have been cricket, you see. And that's what it's all about, isn't it? When you feign an injury and claim a foul, no one says "it's not football". We cricket-lovers have always drooled over the aspects of the queen of sports that makes her reign over other lesser sports.

I had decided to choose cricket as the sport of my passion over two and a half decades back. And have fallen more and more in love, ever since. Moments like these reconfirm my decision. I have chosen the best sport possible, and there's no doubt about that.

We're not the best no. 1 side that there was. But we've behaved like one. Thanks MSD, for making me seriously proud of you twice in the span of four months. Thanks for playing cricket.

And just in case you think he has been soft, how many of you would have the balls to do what he has done, with the test, series and rank at stake, knowing fully that the media would tear him apart if things go wrong as a result? It takes immense heart to do whatever is right; more so if the other option seems really easy and favourable to do.

But then, the easier option wouldn't have been cricket, right? 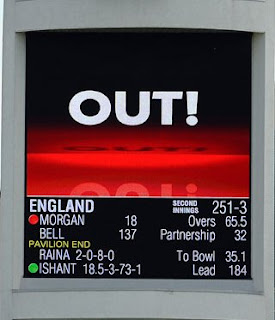 Puked by Abhishek Mukherjee at 01:34

Email ThisBlogThis!Share to TwitterShare to FacebookShare to Pinterest
Tags: Cricket