About twenty-five years back I had locked myself in a bathroom and wept when one Sunil Manohar Gavaskar had announced retirement. 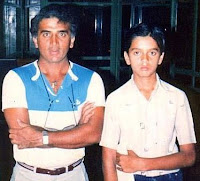 There are moments of grief when you cry. And then, there are some others. Others that make you realise that you won't even be able to ejaculate tears. You suddenly realise that when we will be 6/1 in future, some other bloke shall come out to bat at number three. Some strange entity, maybe familiar in some other role, but certainly not the perpetual bread-earning 6/1 guy, based on whose hard-earned money the others in the family can make merry.

And that's what it feels like, right now. It's like losing the fulcrum of the family. Not losing the coolest, most popular guy, but the unthanked backbone of the unit, the merit of whose existence can be felt in his absence rather than in his presence.

And that is precisely the feeling that I was not matured enough to go through at the age of nine. Hence the temporary tears, not a permanent void.

I know that this is a rather ill-written post - lacking coherence and substance of any kind. But I suppose I cannot blame myself for that. No one can write in peace when there's no wall to protect you from the relentlessly uncompromising outside world anymore.

Must you go, Rahul? Won't you give us another chance to thank you, or at least deserve you?
Puked by Abhishek Mukherjee at 21:51