The curious case of Mumtaz

This is not about the Mumtaz. Mumtaz Mahal was the wife of a gallant emperor; Shah Jahan was so deeply in love with his wife that after her death he made a mausoleum in her memory; he took the second half of her first name, distorted it a bit, kept the last name intact and named it likewise.

A corresponding tomb of mine would probably have been named Shake Mukherjee.

Anyway, this is about the other Mumtaz. Mumu. The diva who ruled Bollywood in the late 1960s and the early 1970s; The fashion icon who usurped the throne of the Sadhnas and Sharmilas; the actress who was elevated from Rajendra Kumar's sister (Gehri Daag) to his heroine (Tangewala); the fighter for whom Shashi Kapoor had once turned down Sachaa Jhutha, but later went on to convince her to play opposite him in Chor Machaye Shor. The superstar who...

... well, it's a long story. Let us begin at the very beginning.

Mumtaz had started off as a child artist; in her early movies she was found adorning the action hero's arms in movies with self-explanatory names like Pathan, Veer Bhimsen, Samson, Hercules, Sikandar E Azam, Rustom-e-Hind, Tarzan Comes to Delhi, and Tarzan and King Kong. All these movies ensured that Mumtaz's career had taken off to a power-packed start.

Mumtaz had even acted as bonafide vamps in movies like Mere Sanam and Kaajal, and even as a comedian in Pyar Kiye Jaa. She also played the second heroine in multiple movies; she was even relegated to the villain's sidekick in Brahmachari where someone of the stature of Rajshree was given the lead role, thereby taking the would-be-glamorous belle's career to an all-time low.

Then, there arrived on the scene a comet called Rajesh Khanna, and their paths crossed; Bandhan happened, and more significantly, so did Do Raaste a few months hence; a superhit was followed by a blockbuster, and Mumtaz was instantly propelled to stardom. The entire nation was converted to Mumtazdom as she glittered her bindis and jingled her chudis to Rajesh Khanna across strange-looking pipes:
A few more months after Do Raaste, Mumtaz gave the nation another blockbuster in the form of Sachaa Jhutha. Suddenly Mumtaz had became hot property, and was competing with the leading actresses of her times. It was her hairdo that had started to inspire women rather than the erstwhile Sadhna's, and it was her style of acting that shone the limelight the Ashas and Sairas and Sharmilas into backstage.

In between all this, there was Khilona, a movie where she surpassed all expectations and matched a peerless Sanjeev Kumar throughout the movie. Khilona won her a Filmfare Award. With that, she had stamped her authority as surely as Idea has replaced Abhishek Bachchan with hello Honey-Bunny thing.

She was sizzling; she was hot; she was desirable; she could dance; she oozed more sex appeal than almost any of her predecessors or subsequent stars and starlets. If you do not believe me, check out this video (do  try your best to ignore Rajesh Khanna's coat, though):
But that was not all. The sensuous hypnotism of her eyes made anyone go weak in their legs. Mumtaz could conquer any man with her eyes. She probably had the best eyes in the history of Bollywood. Men from Kashmir to Kerala wanted her to melt in their arms. Check out this song in case you have doubts:
But above everything, she was an amazingly talented actress. She was at ease through an amazingly varied assortment of emotions - as displayed in multiple movies, but never more than in Khilona, where she surpassed all expectations. Do watch the movie in case you have not. Please do. Seldom have two Bollywood protagonists matched each other to this extent in a movie. Ever. She was only twenty-three then - an age where most of us are somewhat nervous about what to wear on our first day to work.

Mumtaz was probably the most versatile actress of her times. I wonder whether any Bollywood actress (barring Helen) has been as sizzling, as sensuous, as desirable on screen:
First curious decision:
Amidst all this, in 1971, Mumtaz took a first curious move in her life: she acted in a movie called Upaasna. No, that's not curious. Anyone can act in movies called Upaasna, which seems rather pedestrian after Tarzan Comes to Delhi. Upaasna had both, I repeat, both Feroz and Sanjay Khan as her co-actors. Both.  I mean, acting with one at a time is bad enough -  but both? Why, Mumtaz, why?

I have absolutely no idea who decided the casting of the movie - to cast Mumtaz and Helen, the two most seductive women of the era - against the Khans. This is how the poster looked (do note the contrasting expressions of the men and the women): 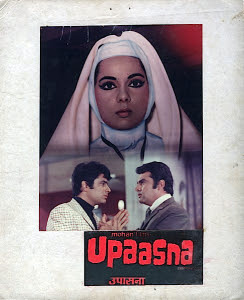 From there Mumtaz's career reached a plateau. Though she kept on providing movies like Chor Machaye Shor and Roti, the hits became fewer and fewer in number as the 1970s preferred action heroes and trophy heroines, which really did not suit Mumtaz. She got married to Mayur Madhavani (?), quit her career, and had two daughters, Natasha and Tanya.

Second curious decision:
Once her daughters grew up a bit and were in boarding school, Mumtaz did a weird comeback in Aandhiyan, one of the earlier movies of - hold your breath - David Dhawan. It was an utterly serious movie where she played the mother of - hold your breath once again - Prosenjit Chatterjee. Of course the movie didn't do too well in the box office (though Mumtaz looked as young as Prosenjit in the movie). It was simply not possible to make Mumtaz look old. They did try to make her wear glasses, but the scheme failed miserably.

The movie, however, did not do too well in the box office either. Thereafter she vanished completely from the limelight, came back to take the Lifetime Achievement Filmfare Award in 1997 - from Shah Rukh Khan - who has always mentioned Mumtaz as one of his earlier crushes.

Mumtaz has survived breast cancer recently; she had been a part of the 2010 documentary 1 a Minute on breast cancer survivors. She continues to live, and as always, do so rather gracefully.

Third curious decision:
In December 2005, Natasha Madhavani, Mumtaz's elder daughter, got married to - hold your breath for one final time - Fardeen Khan. I guess Upaasna (and other solo movies with one of the brothers) had something to do with this. But in that one fleeting moment, the image of the woman in my mind changed forever. The smouldering diva was metamorphosed to Fardeen Khan's mother-in-law in one single decision. All those movies, all those songs - well, seem to vanish into oblivion now; the only surviving image that endures is Fardeen Khan seated at a table in the Madhavani household, and Mumtaz asking him whether he'll want more baingan ka bharta or kheer...
Puked by Abhishek Mukherjee at 13:11