This was a story written for a short story contest as a part of the Indian Bloggers' League Semifinal (don't ask!).  As expected, my story did not make the East Zone shortlist for the most obvious reason: it was inferior to the one that got selected.

Anyway, I guess I should publish it on my blog nevertheless. We were asked to write something within 1,500 words on the picture below, and this is what I had come up with:

Update: I had sent a second failed entry as well. You can find it here. 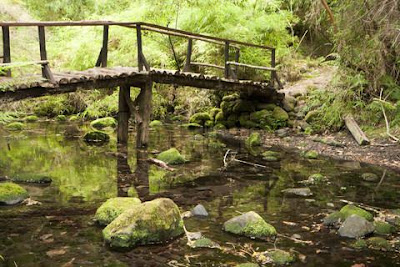 Kumar stared at the messenger with a glassy-eyed look. It had happened again.

The entire Forest Department had been turned into a joke by the events of the past few months. He had become the laughing stock of the entire country thanks to the media and the social networking sites. What was a joke till a few days back had now taken a serious turn.

Kumar knew that the media was not really off-target. As many as twenty-three officers, along with dozens of locals, had crossed the bridge to the other side, never to return. Not a trace of their corpses was ever found, much to Kumar’s dismay.

Of course he had tried: he had sent out larger groups to investigate; they had returned empty-handed. Let alone a person, not even a toenail could be found in the labyrinth of trees on the other side of the bridge.

It hadn’t been like this. Till a few months back everything had been running smoothly. The city had been spreading at a breakneck pace. It had encroached into the abundance of green that had once belonged to the Forest Department albeit over the exchange of a few bits of paper. Trees had been chopped off mercilessly; there had been the usual protests but Kumar knew that they would be subdued soon. He had simply smiled and waited.

When all had gone quiet the axes had come out and the forest had been cleared to make way for ruthless structures of concrete. The small animals and birds had disappeared. They had possibly taken shelter in the forest at the other side of the bridge that had seemed to grow denser with every passing day. They may even have died.

Then, one day, one of the labourers had gone to the other side of the bridge and had not come back. A couple of men had seen him go but could not remember him return. The incident had soon been forgotten. He was not a person worth a fuss.

Then they had started vanishing one by one. The other side was prettier and the abundant flora had provided ample cover for couples seeking the slightest opportunity to seek each other out away from everyone’s eyes. The problem began when they had stopped returning in the usual ones and twos.

Fear had crept in. The labourers had threatened to leave. Kumar had tried to reason with them – but they had been adamant. For once he knew they had been right. For a flickering moment he had even thought they were human. He had assured them that he would send out a force of sorts.

He had sent across a couple of armed Forest Department guards who never returned. Kumar had waited till morning and had sent out another group: he had seen them cross the bridge and vanish into the dense forest on the other side. They had not come back either.

Several subsequent groups had not returned. The larger groups had come back without any relevant information. There was no sight, sound, or odour of any large animal – let alone a predator. The birds had been chirping and the rabbits running as if all was well with the world, but that was all. Even the most ardent of hunters and the most skilful of illegal poachers could not pick up a single thing.

He had specifically asked them to look for carnivorous plants like nepenthes or Venus fly-traps; they had come back empty-handed. He was not really surprised: what had he been expecting? You needed a humongous tree to consume an entire human being.

Kumar had thought of seeking help of the police or the army but could not see how they could do any better than his team. Nobody knew the forest more than the Forest Department. There have been dishonesty and corruption (he was no exception himself) but there was no questioning their knowledge of the forest or their efficiency.

Maybe the police or the army would have used helicopters; but what use would they have been? Not a single ray of light reached the surface of the forest through the dense vegetation: the choppers would not be able to see a thing if the trees did not make way for them.

He chuckled at the thought. Then his jaw hardened. A thought had crossed his mind. What if...?

The next morning he assembled the largest group of men he could. There were the Department officers, still aggrieved over the losses of their friends and colleagues; there were the labourers who had to be bribed or intimidated; there were the land-promoters and their armed minions; and there was a decent-sized group of efficient canines.

They crossed the bridge in a file, proceeding cautiously to ensure that no single person was alienated from the group during the journey. It took several minutes for the entire group to move to the other side. Then they spread out in a single row facing the jungle that had consumed people they had seen alive.

The dogs confused Kumar more than anything. He had half-expected them to be sceptic, sniffing around for trouble. Instead, they marched into the forest and were gone in a rather playful mood. Their affectionate low growls were audible well after they the nonchalant forest had consumed them. They were certainly alive, just like the birds that were chirping cheerfully.

What kind of creatures distinguished dogs and birds against human beings? Were there other humans inside this forest? If not, then what was going on? If yes, what were these people up to?

He ordered the men to chop the trees down to make way. This is going to take ages, he thought. He lit a cigarette.

The trees stood still. It was the most sinister thing he had ever seen. The trees were at war, he thought. The perfectly commonplace banyan and deodar and mahogany had turned into silent, motionless, determined foes.

Why? Everything was fine a few months back. We used to come to this side of the bridge and return safely; what changed?

This was logic-defying, he thought. This does not make any sense. Trees do not move.

But these trees were not actually moving. They had seen their mates being chopped off brutally. Now they were simply replacing them on their side of the bridge.

With our lot, Kumar thought. They have not been killing the people. They have been converting them.

He clenched his fists. If the trees are at war we should let them know who the boss is. If it comes to this then so be it.

He ordered to set fire to the forest. The jerry-cans of petrol came out and suddenly the dark green of the forest blazed into flames in the dusk, setting a terrible contrast against the unblemished blue horizon.

The trees struck back: the men who reached close enough were converted. Kumar stepped forward, shouting instructions – though he was careful to remain at the rear. He had his priorities set.

The fire spread at a rapid pace in the dry winter breeze. The birds flew, the yelping dogs rushed back, the squirrels ran helter-skelter in panic. Kumar could sense the adrenaline build up in him as he strode into the trees that had been burned to the ground.

It took hours for the men to burn down the forest completely. Their own numbers had thinned, but they had won the battle. They cheered and hugged each other in celebration and made their way back to their side of the bridge.

Man had won the battle of species the way He has over millennia.

Kumar realised what being a victorious general was like. He filled a primal rush of blood spreading through his arteries – the kind that had driven triumphant warmongers into atrocious acts all over the annals of history. It was a shame there was nothing to plunder or to put to swords.

Kumar grinned. Of course there was loot – a lot of it. More land. More money. This side was the property of the Forest Department as well. He could not wait to go back. He walked briskly and broke into a quick jog as he approached the bridge.

Hang on, the bridge cannot be moving.

It felt like his feet were fixed to the ground forever.

Email ThisBlogThis!Share to TwitterShare to FacebookShare to Pinterest
Tags: Fiction