I finally have something in common with Woody Allen: people like our 'early comedies'. Nobody has liked the concept of Abhishek's Blog growing up. I have been receiving complaints that I'm getting all pensive and emotional.

Now, this is a serious complaint. It's time for a change of genre. Given the fact that I am seriously challenged in the realm of humour the safe option would probably be to fall back on the aspect of life I'm really good at: rambling.

What's more, this is not even an original topic. This is going to be a sequel of an older one, which means that the usual disclaimer will hold good:

What I'm talking about is things (or people) I dislike with a passion, while other people find them perfectly normal.

1. The Hole Entrepreneurs
I was probably Hitler in my previous life; or maybe I was Marie Antoniette; or maybe Genghis Khan (who basically murdered anybody who misspelled his first name, which was everybody: I himself used the spelling 'Chengiz' in my heydays, but by then he was dead); or maybe I was one of these ladies.

Unlike credit card points sins do get carried forward; they have done in my case, at least. This is probably the reason that God and Satan had got together, had forced me study inorganic chemistry, watch Kirti Reddy trying to act on screen, and - well - purchase leather belts and watches with leather bands.

Don't get me wrong. Leather is cool, more so because I'm not a vegan. Given a choice I would probably have become a non-vegetarian vegan (someone who eats flesh but does not use animal products), but till it has a name I would stick to my habits.

The manufactures - may the sky fall on their heads - have clearly singled me out for this. They do not, I repeat, do not want me to get a perfect fit at first attempt. I always have to get an extra hole or two done to allow it to fit me.

Exactly why they do this to me remains a mystery. As I have mentioned above, it must have been a thing from my past life.

2. The Obstinate Soaplets
The habit of sticking the remaining 1/37 of the last bar of part-elliptical, part-rectangular soap to the fresh one is as old a Bengali middle-class as forming group theatres. It usually works well if both soaps are more or less soft. The fun begins when it is not so.

Two hard bars of soap simply refuse to give in to whatever methods you apply: you may soak them in water and then try to gel them together with your steely grip. They just refuse to stay together the way USB drives refuse to fit at first attempt.

The following chart can be considered a handbook on this: 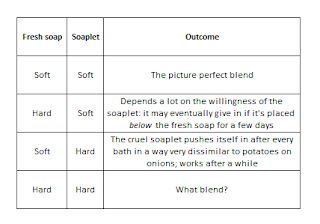 3. The Humming Pigeons
Don't get me wrong. Pigeons are nice, pigeons are peaceful, pigeons are generally well-behaved, and pigeons have made it to iconic scenes in movies like Parinda and Dilwale Dulhaniya Le Jaayenge. I have also heard that they are generally delicious.

They also used to carry letters, which is rather cool. They come in different hues of white, black, blue, and bluish green, and are generally quite tolerable.

Unless they decide to build nests in air-conditioners and go hmmmmmmmmmmmmmmmmmm throughout the day, that is.

4. The Weekend Plan Revealers
Okay, let me break this amazing bit of knowledge for the sake of the world: my idea of a perfect weekend involves a lot of reading, a lot of writing, and a lot of thinking. It also involves catching up the random movie and meeting people I want to.

It does not involve meeting people I do not want to meet; it does not involve hanging out or chilling out with anyone who uses the abominable phrases; and seldom does it involve going on a weekend trip, because the preparation and journey typically involves more time than the time spent at the spot itself.

But that is just the proverbial tip of the iceberg. I do not have anything against people who hang out, chill out, or go on weekend trips, no.

What I do have a problem is with the same people asking me what my plans are for the weekend, or how my weekend meant. If you're reading this blog post you do have a fair idea.

If you still do not get it look at the first paragraph of this segment.

If you still do not get it, do leave a comment. I will reconsider our relationship.

5. The Tee-Party
This is more of a question, so I will be curt and to the point. What am I, as a man (I've leaving out the macho alpha male bit, which, however true, is redundant here), supposed to do when a woman wears a t-shirt with a one-liner* or a picture that is possibly funny?

Will the answer change if the woman is reasonably, er, well-endowed?

* This is an assumption from the fact that men wear t-shirts with one-liners as well.

6. The Polo Pizza People
We all know what is common to doughnuts, cheerios, bagels, and Nestle Polo. However, there exists a group of people who believe that the exact opposite holds for pizzas. The following illustration would help prove the point: 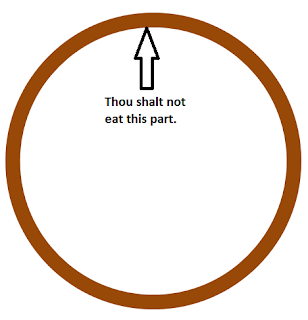 So basically every pizza slice ends up looking this after every meal.

Fine, you cannot like the ends or crusts or whatever they're called. That really doesn't mean you throw them away. This is food, no less. Remember, life always comes with a thin crust option. And I'm not talking about Jennifer Lopez's wardrobe here.

7. The Elevator Button Champions
This may come as a revelation to a lot of people, but I guess it's time for me to come out with the truth: when you're in the lobby pressing elevator buttons do not make the elevator arrive to you a millisecond earlier than when it is supposed to.

8. The Deliberate Pluralators
You cannot, I repeat, cannot have ONE patties. Patties is the plural for two words - patty and pattie. These are two completely different kinds of food.

Patty is the thing that goes inside a hamburger. In Mumbai a patty goes by the name of aloo tikki and it goes inside a vada paaw. It's basically the same thing as a beef patty, sans the taste. Below is an illustration. 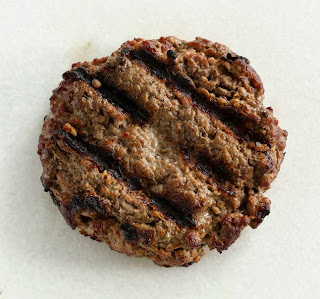 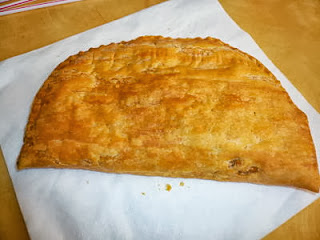 This is not 'a patties'. This is not a 'patty' either. This goes by the name of a PATTIE.

9. The Informative Callers II (for I, see part one here)
Oh, these people are a class apart. Suppose this person is called X. You have had a gazillion or so conversations with X, and X is perfectly aware that the CLI on your phone shows X's name. And yet, the moment you answer the call you hear that ubiquitous bright, lively voice: "Hey! It's X!"

It's definitely illuminating, X. Thank you for letting me know that you're not Mila Kunis.

She's not a shade on the majestic Farida Jalal or, as Diptakirti has pointed out, the first 'cool mom' of Bollywood - Reema Lagoo.

Bariwali did not work because of her. It worked despite her. She did not act there. Rita Koiral (or Koyral, or Kairal - does this sound similar to Genghis Khan's name?) did. And the National Award did not go to Rita. It went to Kirron.

It went to someone who cannot act.