The Secret Proposal (and an author interview) 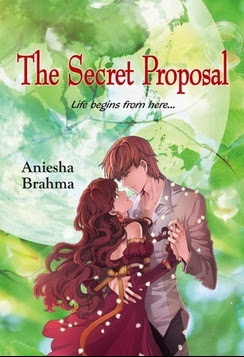 No, do not go by the cover. The book is infinitesimally infinitely better than what the cover makes you think it is. The cover simply does not do justice to the contents of the book.

This is yet another romance novel that would get lost somewhere simply because the author did not could not promote it the way the big guns do. However, if you ever come across this one, do pick it up.

An interesting blurb typically boosts the sales for most books. Unfortunately, the books seldom live up to the promises the blurbs build up. The good thing is the fact that The Secret Proposal does meet the expectations.

Brahma's writing is lucid, and, for lack of a better word, fat-free. She knows how to trim the contents, retaining exactly the what is necessary and leaving out the rest. The language is no-nonsense, which works perfectly fine given the complexity of the plot. The reader doesn't lose way in the process.

The author also has that page-turning ability that is the mark of the big guns. The plot, unusual at times, keeps you hooked throughout its length. She is also an excellent judge of human emotions, especially romantic. There are several moments that take you to your own twenties; there are moments throughout the book where you end up smiling and nodding, being able to relate to yourself (or maybe that of someone you know closely).

All in all, a decent start to a promising career.

I had the privilege of talking to Aniesha immediately after writing this review, so I decided to do the first interview on this blog. I guess this will be a permanent feature (if the authors oblige) from now on.

Abhishek Mukherjee (AM): Not many people get published at 22. What does it feel like?
Aniesha Brahma (AB): It feels amazing... it had taken quite sometime to sink in, that I finally had a book published. It's a year later now, and it still feels like a dream at times.

AM: When did you take up writing seriously?
AB: I always wanted to be a writer, right from the age of six. But the serious writing began, when I joined FictionPress in 2009. In 2011 a friend casually suggested that I should try to get published. That was the time I was writing The Secret Proposal (then named The Strange Proposal) on FictionPress.

AM: How did the book form in your head?
AB: It was on this very day two years ago... the 12th of December 2011. I was at a wedding and was thoroughly bored. A stray thought crossed my mind - what I met someone interesting in this wedding... what if that person had something to do with my past? Before I knew it my imagination had run wild and Jasmine and Tanveer came into my mind, with their story.

AM: Is the book based on real-life stories or characters?
AB: Like every other writer, the main character was based in part on myself. Lakhi was based on my elder sister, and the wedding scenes were taken straight from my sister's wedding - except the part with Tanveer, of course! That was made up!
Meghan was based on my real life best friend, Soumma Roy Chowdhury. Tanveer was based in part on my childhood crush and a friend's childhood crush. I found it amusing that she liked him for eight long years and didn't do a thing about it.

AM: Is there a particular memory related to the writing of the book that you would like to share with the readers?
AB: I know that a lot readers said that the book seems to drag in the second  half. The reason for that was my fans and readers on FictionPress. I had ended the story in 25-odd chapters. I got private messages and reviews saying that it was too sudden and they wanted to read more about the characters. It was overwhelming to receive messages from the world over, saying how much they loved the story and the characters, and were unwilling to part with them just yet. So my novella turned into a 55,000 word novel.

AM: What is next on the list?
AB: There is a children's story I am working on, about the hierarchy of neighborhood animals. There's another story too - a romance novel of sorts - dealing with the rights and wrongs of being in a relationship. Let me see which one gets published first. And then, there's a short story in the Coup D'East short story collection as well!

AM: Thank you for your time, Aniesha. It was nice talking to you.
AB: Likewise. Thank you for the lovely interview, Abhishek-da.
Puked by Abhishek Mukherjee at 21:32