It was not my fault that I went absconding

It has been over forty days since I have not written a blog post. Forty. That is the number of thieves Alibaba had to encounter. Forty days is also 1/45 of what Salman Khan’s original sentence was, and 192 times the duration he had to spend in jail or lock-up or wherever they imprison drunk drivers who kill black bucks, an animal whose name reminds me of unregistered money.

It was not my fault that I went absconding. There was, to begin with, India ka teohar (which translates to “a six-week festival when Sony MAX does not show Sooryavansham”). Following India ka teohar is a part of my profession. I basked in the festivities.

I watched lots of pre-match interviews live from grounds. In one of them I heard Sunil Gavaskar, supposedly India’s greatest opening batsman, asking Virat Kohli, India’s finest contemporary batsman, whether the latter’s girlfriend was present at the ground. We rewinded and replayed it at the newsroom. It was true. I wish the girlfriend had pulled off an NH-10 act soon afterwards.

It was not my fault that I went absconding. I visited Kolkata to show off that I have not turned into a non-residential creature. Yet. I met several relatives and friends, which meant I had, for once, a social life.

It was not my fault that I went absconding.  I met those lovely people from Coup D'East (two of them for the first time) at Au Bon Pain (I mentioned the venue deliberately, to accommodate two French proper nouns in the same sentence).

I had beef at Mocambo with Amritorupa and bought Bengali books from College Street with Amritorupa, on the same day. I was also spared the effort of making my own coffee every morning. Given the benefits, enduring Bengali soaps was an acceptable castigation. I lived to tell the tale.

I also met Shakuntala, a 37-year-old man’s equivalent of what used to be a “best friend” at school, after two years. She will not be flattered, for she seldom reads what I write. I went to her place, acquired whatever she had got for me from USA, and dozed off immediately.

It was not my fault that I went absconding. During my Kolkata trip I was up against an earthquake, a fire at New Market (I was not present), hailstorms, an election, political riots, and a strike. The earthquake was particularly serious, for I marked myself safe on Facebook while watching a Test between England and West Indies at night.

The strike was also serious, because I had an afternoon snack at home, followed by a “high-tea” with Sayantani, followed by coffee, sandwiches, and inane conversations with friends from a cricket group, followed by a heavy dinner at home.

It was not my fault that I went absconding. I took time to get used to the brutal humidity of Navi Mumbai. Check weather.com screenshot below as an example. This is certainly not the kind of weather under which quality bloggers thrive. 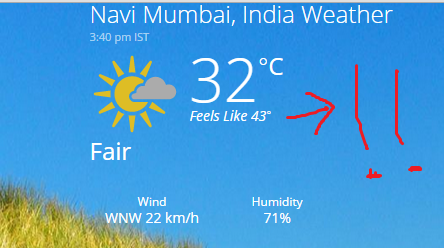 It was not my fault that I went absconding. I have been discussing Harry Potter (for she has started a wonderful book-by-book series on the epic) over the phone and on chat with Amritorupa. There have been calls where we got to know that our service providers automatically disconnect calls after long, long conversations.

Following these inane discussions, she penned down eagerly-anticipated blog posts, one for each book (she would have done the same without the discussions as well).

It was not my fault that I went absconding. I watched Piku, one of the most heart-warming movies I have ever seen. Deepika Padukone used to be an actor I associated with her anti-depression stance. Piku took her to the next level, where she overshadowed Amitabh Bachchan easily (my heart breaks to admit this, but he went way, way overboard with his stereotypes) and Irrfan, with some effort.


Piku deserves special mention, for I cried in the end. I also wondered how a Konkani lady managed to look so Bengali (more than some Bengalis: Bipasha Basu, for example). I dissected her looks, trying to compare her with other Bengali


Bengalis, and found out the amazing job done by the makeup artist: they did the eyebrows a bit, did not do anything to the lips, and made her already awesome eyes more prominent with a dash of kajol or mascara or whatever mysterious thing it is that women use.
They also added the ubiquitous tip (bindi). The tip (Shilpa or otherwise) is possibly as Bengali as anything I have seen, adorning foreheads or mirrors for centuries. Most importantly, Deepika mastered the Bengali accent the way few from outside the state have. At least she does not say KOLKOTA.

It was not my fault that I went absconding. I also watched Bombay Velvet, a movie that the world has disliked for some odd reason. The script was taut, the music enthralling, the sets mind-blowing, and the performances impressive. The movie also featured Raveena Tandon, of whom I got to know two things: first, she is called Raveena Tandon Thadani these days, and second, she will never age.

It was not my fault that I went absconding. There was the birthday-fest of Sachin Tendulkar, Satyajit Ray, and Rabindranath Tagore, which is nothing short of a fortnightly celebration for Bengalis. I lived up to the occasion by deleting WhatsApp-delivered images marking the same. Exactly why WhatsApp memes spread through images and not text is something I have never been able to fathom.

It was not my fault that I went absconding. I watched Gupt thrice (or four times) over this period of time, and the more I watch it, the more I realize that the world has produced few whodunits to match its quality.

Note: In case you have not watched Gupt yet, I do not even know why you exist. Go and watch it. Till the end you will never be able to guess that Kajol is the killer.

It was not my fault that I went absconding. I bought toothpaste. I changed my Facebook cover picture twice a day. I became a Baba Sehgal fan all over again. I kept fighting a lost battle against adamant bed-sheets that refuse to get tucked under mattresses. I worked soft and partied softer. I went from CST to Dadar, changed trains, and went to Kurla — in the evening.

Most importantly, I used the word “thamba” to stop a Navi Mumbai auto-rickshaw successfully.

You see, it was not my fault that I went absconding. After all, this was also the month when I met my daughter. After ages.
Puked by Abhishek Mukherjee at 03:10