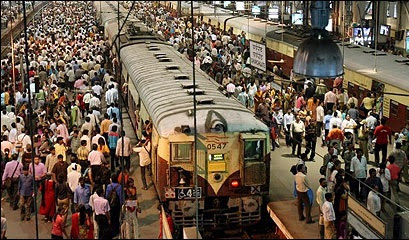 The authorities have recently decided to shift my workplace to Mumbai, a city significantly bigger than Navi Mumbai. This obviously added to my glamour quotient, for I travel to what Mumbaikars refer to as Town: in other words, I am part of the crème de la crème of the office-goers in this city that seems to remain alive round the clock and calendar.

This affected me in two ways. First, I had got attached to my previous office. If you do not get why this bothered me, think of it this way: how will you react if you suddenly find out that Arsalan — the greatest of all pilgrimages in the history of mankind — has suddenly been serving biryani on bright blue plates? They will still serve the same manna from heaven, but will it taste the same during your first few trips?

Of course, I have a new office to get attached to and attach files to emails from. This pun would have thrived if I carried an attaché case to work, but you cannot get a touch of everything in life, can you?

The other aspect is more significant: I have to travel to work.

This may not sound very threatening for the uninitiated. I know people for whom travel is biryani. There exist people who travel every day to work and take leave to travel to random destinations and return from travel to travel to work every day again and derive happiness out of the entire process.

I am not one of them. I used to walk fifteen minutes to work.

Walk. Not fifteen minutes in a vehicle of any sort. Walk.

That has changed. My biryani is no longer cardamom-free. And I cannot guarantee that this will be my last mention of biryani.

Obviously I will have to shift base, but that will take time. As for the interim period, I have to travel.

And it has to be by train. If I take the road — especially in monsoon, that selfie-inducing obnoxious time of the year — I will probably develop a bedsore of sorts.

No, it has to be by train. That bit I figured out after a day and a half of taking the road.

I know the tense is not consistent here. Blame it on the train journeys.

Note: When I say ‘tense’ I mean that past-present-future thing, not the state of mind you develop when the Arsalan angel tells you they will have to check whether there is mutton in the kitchen).

Where was I? Ah, Mumbai local trains. I am no stranger to them. They are powerful, authoritative, and omnipresent. I am aware of the advantages — speed, consistency, and availability, and more. They are the heart of the city, and more. Maybe they are even the lungs and kidneys and pancreas of the city as well.

However, the train also comes with a massive, humongous drawback: they are incredibly crowded during office hours.

I used to think Sealdah is crowded. It is. I have let trains pass Sealdah, casting futile, respectful glances, maintaining a safe, reasonable distance. No, I would never have managed to permeate that phalanx.

It is different in Dadar. My first attempt involved buying a ticket, going up the footbridge, and casting a futile, respectful glance at the platform, maintaining a safe, reasonable distance. I took a taxi that day and reached probably the next month.

That was what I was up against.

Mumbai Suburban Railways have three main lines. The first two are called Western (it is in the west) and Central (just east of Western). One may expect the third, the easternmost to be named Eastern. But the City That Never Sleeps decided — perhaps on one of those sleepless nights of hers — that Harbour Line would be a more appropriate name.

Vashi is on the Harbour Line. The station nearest my office is Currey Road, on Central Line; it is also approachable from Lower Parel, which is on Western Line.

In other words, I was doomed.

If you look at the map, you will notice that the Harbour and Central lines meet at Kurla, and later at Sandhurst Road, Masjid, and CSMT, as CST is called these days. The M stands for Maharaj. The full name reads Chhatrapati Shivaji Maharaj Terminus.

Indeed, that literally translates to Emperor Shivaji Emperor Terminus. Before you say something on redundant words, you remember the irrelevance of the raita, don’t you?

Where was I? Ah, Kurla — the station that caters to approximately the population of New Zealand at any given point of time in office hours. If the entire population on Kurla Station at 9 AM decides to yell in unison, they will probably produce enough energy to create an earthquake in Mars.

But I had to change trains at Kurla. There was no other option.

The first bit was easy. Since Vashi is one of those ‘marquee’ stations, trains often start from Vashi. This means that on a good day you may be able to travel in first-class with both your legs inside the train. Fine, I exaggerated a bit, but you get the gist.

Unfortunately, trains do not start at Kurla. They pass through Kurla. And when they halt at Kurla, 43,224 people get off and are immediately replaced by another 72,163. Of course, these are merely eye-estimates and may have been off by a couple of digits or so…

So there I was, armed with a first-class monthly ticket, an umbrella, and a paunch (among other accessories).

I had to brave what Mumbaikars have been braving since time immortal: change train at Kurla in office hours.

The first phase went without much hassle. Twenty minutes of standing is about half of what I used to do in physical education classes in school — albeit without the cell-phone trilling provokingly in my pocket.

Then came Kurla. Or rather, then came Abhishek, if you look at things from Kurla’s perspective.

One has to cross over to another platform to change trains at Kurla. There is a footbridge for that. I was foolish enough to assume it would be a cakewalk.

I was there before I could figure out exactly what was going on. All I had to do was turn twice.

I waded through people to reach the section designated for first-class passengers. In case you are not aware of what to look for, it is a metal pillar painted in yellow and red to match the MCC tie, blazer, and hat.

Then I prepared myself for the war, the real showdown, my Valhalla.

My ears were the first organs to sense the arrival. The sound was unmistakable.

Unfortunately, mine were not the only ones: 72,163 other pairs also picked up the sound.

They were on the edge of the platform before my ears could transmit the message to my brain. I had lost the first battle.

There was no way I could make it to the compartment. My only chance was the platform-change drill, but in this case everyone was in front of me.

The train left without me.

But I did not leave without a train. True, I had lost the first battle. But I had also learned a lesson, a very, very crucial one: Mumbai office-goers thrive on aggression, speed, fitness, and dexterity, none of which, unfortunately, is a part of my armoury.

So I decided to take time out.

What were my strengths? How could I put them to use to outdo these commuters and put at least one foot on the compartment?

Would puns do the trick? They came to me, one by one. I kept telling me that I could train myself to compartmentalise my flow of thoughts. I could not afford to let my resolution to be derailed. I needed to establish a platform in this realm of commuters.

No, no, no: it would not work. It seemed extremely unlikely that people would make way for me if I keep uttering these one by one.

There had to be a Plan B.

Could it be cricket history? Would they peacefully let me board the train if I lectured them on Lord Frederick Beauclerk?

What about Plan C? What else was I good at?

For someone who never went to a typing school, I can type reasonably fast. Unfortunately, I use a desktop at work and was not carrying a laptop, hence… hey, what if one of them carried a laptop? What about a typewriter?

Douglas Adams? Woody Allen? The Ray family? Asterix? What would it be? Map-pointing? Giuoco Piano? What? Would wolf-whistling work? What about touching the tip of my nose with my tongue?

I moved on from Plan D to E to F and beyond. Panic struck when I moved past Plan U — what if I ran out of letters?

Another train, complete with twelve compartments and 72,163 passengers, had passed by in the interim period.

Then came that Eureka moment that had once made Forbes launch into the Indian market with an assortment of vacuum cleaners and water purifiers over a decade back.

At about a quintal, I weigh about twice the average Mumbaikar. My mind raced. What was it they had taught me? Momentum was mass times velocity, was it not? If the Mumbaikar moved at twice my pace, I could counter him with twice his mass.

And I had twice his mass. And some velocity, which would actually put me at an advantage.

And when it comes to mass (I am not discussing churches here), dexterity does not matter. No, it does not. And I it had dawned upon me — exactly how to make mass count over dexterity.

So I prepared myself. How to go about it? Use my knee? Elbow? No. Go headlong. Think of yourself as a bull, a buffalo, a grotesque, ghastly minotaur, albeit a hornless one.

I knew they would go past me the moment they would hear the train arrive.

They did exactly that.

I smiled. I knew what I was going to do.

Then, as an entire garrison attempted to squeeze itself into one gate, I acted.

I took a couple of steps and pushed myself, almost headfirst, into the back of the frailest individual I found.

He stood no chance. My mass, combined with my more-than-zero velocity, propelled myself inside the compartment. The man enjoyed the collateral benefit of being thrust into the compartment as an inseparable entity, but that did not matter.

I had finally found my biryani.

Hang on, is it Monday train day already?
Puked by Abhishek Mukherjee at 02:06