The third planet of the Solar System is rather intriguing. It's unbelievable that people from ethnic backgrounds so diverse exist on the same blue-green orb simultaneously. Most singular, though, is a certain country in Asia - one that hasn't attacked another country for a couple of thousand years; one that worships immortal apes; one that had invented the zero and had produced The Kama Sutra; and above all, one that has allowed Fardeen Khan a career in acting.

The eastern sector of the country is somewhat less glamorous, having just a single city of somewhat fame. At the north-eastern bounds of this city lies a recently developed region called Rajarhat. This sector, though not reputed as a tourist attraction, has hidden in its nooks one of the most spectacular locations ever: Hotel Rose.

Unlike other restaurants, Hotel Rose is not renowned for its food. It's the menu that draws the attraction of the spectator. Even if you're not a cryptic clue connoisseur it will leave you reeling: the sheer mystique draws you in more magically than a Dan Brown thriller. And unlike the 600-odd pages of Dan Brown novels, the masterpiece is laid out in just two pages.

(A special note of thanks to Atanu for letting me use his pictures.) 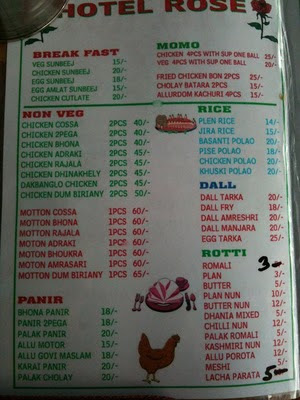 Let us go through the items one by one: 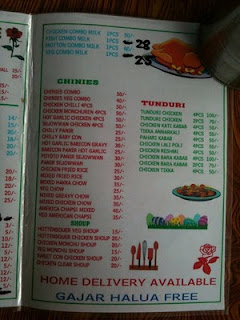