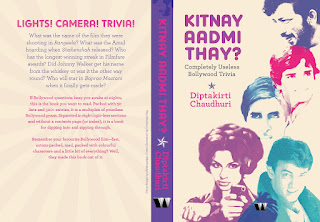 My brother and I grew up in an era before the internet, quizzing each other on obscure Bollywood-related trivia; our parents thought we were insane, and would probably have preferred us taking to drugs instead.

Anyway, these discussions, while making us inferior students, enriched our knowledge in the realm of Bollywood trivia. Of course, this also made us proud, very proud of ourselves - and gave us the false impression that we were quite a handful when it came to Bollywood quizzing.

Tnd then came the internet. And our respective self-esteems came down with a loud crash. We were, to put in a single word, incompetent. Not because we weren't good enough. But because there were people far superior to us. I am about to discuss one of them over here, and his new book.

Which brings to the end a rather long and irrelevant introduction to a book review.

I have never hidden the fact that Diptakirti is my favourite blogger. He doesn't exactly blow you away with his style; he draws you closer. You feel at home. And yet, you are in awe with the sublime simplicity of his prose, even when he discusses Poonam Dhillon, Benaam Badshah or Yunus Parvez.

What is equally incredible is the ease with which he moves from one branch of Bollywood trivia to another. The more you read, the more you realise that his research was not based on mindless hours of tiring, monotonous research. There was unadulterated love driving it: for cinema, for Bollywood, for the stars.

And now, all of it has culminated into a book. Which means that the English has been edited multiple times to attain perfection, and the research has been more serious (rather than being from memory, which was ridiculously accurate anyway). Given that it's Diptakirti (to whom both research and prose come effortlessly), the outcome is simply lethal.

I cannot remember the last time when non-fiction was this entertaining. The entire book is in the form of lists, and during all 320 pages of it (which basically means 160 or so page turns), you are in a continuous dilemma: will I flip and see what the next entry on the list is, or will I read through the details of every entry on this page?

The lists are unique and well-thought enough to make you take the first option. The depth of research and prose make you take the second option. You're torn. Over 320 pages. You are not left with the option to go slow, even on a Friday night or on a Saturday morning. And you keep smiling and nodding silently as you go through every list.

Buy it. You won't regret it. You will have the edge over the other guy if the girl your're chasing is a Bollywood buff. You will win quizzes. Most importantly, you will feel really happy. Gift it (preferably after asking a few questions from the book itself). You'd be thanked. Like I have been, already.

Between us, my brother and I can possibly take on a bigger chunk of the world now. After all, not many people know what Sonu Walia does these days, do they?

And - if only the book had been longer. But then, one can always ask for a sequel, right?
Puked by Abhishek Mukherjee at 16:00