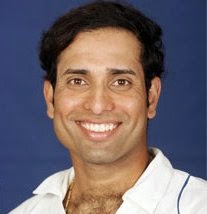 Tall guy scores 51 on debut, bailing us out against South Africa. I like him.

Tall guy opens batting and hitting Aussies all over Sydney Cricket Ground. Scores 167 off 198. Team scores 261 and loses by an innings. Hits all kinds of shots everywhere. McGrath and Warne decimated. I turn into an official fan.

Quits as an opener. Informs all and sundry that he won't open.

Scores two 300s somewhere in Ranji Trophy. Fails to break into the middle-order. In and out. Grins.

Scores 59 standing among the ruins as stupid Aussies bowl us out for 171. Mr grinner is sent out at three. On-drives Warne against the turn on fourth day, all day, for fours. Scores 281. Weird victory. Grins. Converts me into a hardcore fan.

Hooks Pollock for six. Scores an impossible thirty-odd at Bloemfontein. Greatest thirty-odd I've ever seen in a quarter of a century. Overshadows Tendulkar's 155 and Sehwag's debut 105.

Comes out at Kolkata with side trailing in second innings, four wickets down, trying to save innings defeat. Easily evaded. Tall guy scores 154. Grins.

Identical situation. Conjures a 148 at Adelaide somehow. We win a test in Australia.

My daughter is born on 1st January 2004. Our hero hits Aussies all over the park two days later. Outscores Tendulkar and scores 178. We cross 700. Declare. The man grins.

Scores five international hundreds on tour. No one else scores more than one.

Picks up vague injury. Comes back. Fifth ODI against Pakistan. Shabbir Ahmed bowls two identical deliveries. Outside off. Good length. Both good deliveries. Yet both hit for fours. One through extra cover. The other through fine leg or thereabouts. Grins. Scores a hundred. Wins series for us. Becomes my favourite cricketer sportsperson of all time.

Sent out at three again at Mumbai. Clarke takes 6/9. He scores 69. Match turned on its head. We win. Effing Australians get what they deserve. No footwork. Just grin and wrists.

Moron grins on as if he's a five-year old who has just been gifted with a huge box of candies.

Partnership with Zaheer Khan to win first ever test in South Africa.

Takes control of dressing-room after Harbhajan ban. Makes inspirational speech that team needs to be one in backing the off-spinner. No grin. Possibly.

Deccan Chargers offers him cash. Lots of cash. 15% more than their MVP. Turns it down and offers to be bought instead so that Chargers can spend money on others. I read news three or four times in disbelief.

Chases down big target Lankan soil. Grins again. I wish he didn't grin so much. Or so honestly.

Fairytale one-wicket win. Guy shouts at Ojha for not running. Looks almost comic. I end up writing this after staying up all night in EST.

Partnership with Zaheer Khan to win test in South Africa. The repetition is not a typo.

Sitting here, dazed, writing stupid blogpost. Bad English. Only facts. Only memories. Pent-up emotions. Cannot form coherent sentences. My hero is gone forever. It's not like letting a Dumbledore or a Sirius go. It's like Rowling dying midway through the series herself. It's that big.

Cannot accept retirement. Too harsh a blow. He needs to play on. I know it's hard for him. I know it's the selectors. I know he cannot handle ignominy.

Cannot come to terms, though, that he won't bat.

Feel like finding out his number and asking him to stay.

Eden Gardens is a ruin.

Cricket is a drone.
Life is a burden.

Give me back Laxman.

Let him emerge once again at 59/3. Let them bowl at him. Fast. Hard. Lots of spin maybe. Let them test his mettle. Let him have fun. Let him use the entire ground as his canvas. Let him bat on. Bail India out of trouble. And then get out playing a stupid stroke. And grin widely.

No tears, though. I grin as I think of him grinning. Will grin every time he goes.

They tell me he'd play on for Hyderabad. Not IPL. But Ranji. Will support Hyderabad. Not Bengal. For the first time ever since the beginning of time. As long as he's around.

No, wait, it's one long, hideous nightmare, isn't it?

The grin has haunted me all night. Things are not the same. They won't be, either.

I shouldn't have written this post after all.
Puked by Abhishek Mukherjee at 11:51