This is not a story about rivers or the wind, so do not expect this to have cute-sounding words like in it. This is a rather stupid story about a boy man male who was forced into being a literate many, many years ago.

It used to be a wonderful world back then. The children were allowed to roam across their worlds the way they wanted to. The fathers and mothers took care of everything. Even if they didn't, nobody bothered: they watched Doordarshan instead (1980s Doordarshan - especially the Bengali channel - was truly breathtaking: they used to air a programme called Saptahiki where they showed on screen the entire schedule for the coming week, and the anchor actually read everything out in a drone). People read newspapers before they went to work and after they came back. Then they watched Doordarshan again. They ate early and slept early (though not before they had their last dose of Doordarshan).

It was during this period, during this ubiquitous bloom of Doordarshan that I was given my first pencil. I have no recollection of what it looked like (though I'm probably sure that it was a very thin strip of graphite wrapped in soft wood) and probably had something like Nataraj written on it. I loved writing (though my handwriting used to be appalling till very late) and for some reason, once I could exercise some sort of control on my fingers, drawing copies of maps from the Atlas using a tracing paper.

I had relatives. All sorts of them. Even dead ones. Of those that were living, one used to live in the United States. I'm not exactly sure how we were related, but I knew two things: she was two generations behind me, and she was on my mother's side (of course she was on my mother's side: I know some people who can quote their family trees from memory; my mother can probably quote a family forest).

Anyhow, my mother returned from meeting her and announced triumphantly that pishimoni-dida had got something American for me. I wasn't too eager on these foreign lures: moreover, I had sought out America on my globe: the quadrilateral looked larger than the Indian one, but was coloured pink (unlike the gorgeous lemon yellow that India was), so was probably very boring.

It turned out to be a pencil: bashfully yellow, but that wasn't what made it special. It had an eraser at the back. Pink, smooth and almost hemispherical in its existence, the was magical. It meant that I could now write, and when I needed to erase, I did not need to reach out (probably two inches or so) for the white rectangular perfumed alphabet-strewn erasers with green strips on top, but I could simply turn my pencil by a hundred and eighty degrees and scrub.

This turned me into an instant hero. Some people claimed that they had heard of pencils like that, but to produce a pencil like that out of your pocket in a group of kids equipped with sadly handicapped pencils were no match for my newly found glamour. 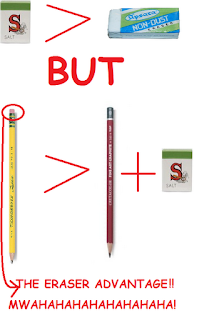 However, to my dismay I found out that the trailing eraser, though a significant component of my Montessori days of new-found glitz, turned out to be a serious hindrance to the consumption of my main food group during my school hours, which typically comprised of a mixture of saliva and pencil juices.

This had to end. Gnawing through bits of metal-coated rubber (or was it plastic?) wasn't the same. I tried chewing through laterally, but it wasn't as satisfying. So I had to resort to two pencils - one for my glamour quotient, the other for my physical nourishment. As I look back at it, the solution seems to be so Teslaesque that I feel saddened that I at having lost the touch over time.

Then something catastrophic occurred. As cowdung cakes and coals got replaced by LPG all over Kolkata, my mother brought home a box of pencils with erasers dangling shamelessly behind them. They looked exactly the same as their counterparts manufactured two oceans apart: pale yellow with pink erasers. I don't recall whether it was Apsara or Camlin: but whoever decided to bring out those pencils in India will never be forgiven.

Everyone had their own eraser-pencil now. Everyone. Everyone. Everyone. Everyone. Everyone. Everyone who could write was now entitled to grab a bunch of those pink-tailed wooden menaces. It was not a novelty any more: it became as commonplace as Lifebuoy soaps and Nirma detergent powder. Had they had their way, they might even have used miniature forms of those pencils in groups of fifty and piled them inside red matchboxes with pictures of black ships or white cats on them. They invaded the schools of Kolkata like indomitable swarms of locusts, and soon they were all over us. My days of glory were gone.

And then came the plastics. Cute little bits of nuisances that made their way to our hands. They, too, like the ones with erasers up their arse, must have originated in the United States: however, pishimoni-dida could not get one for me ahead of the others, and I had to remain content with plastic push-in pencils being showered on me roughly at the same time as my classmates.

These things weren't too bad. It basically had two components: a long, hollow, cylindrical container of plastic, coated in floral or cartoon prints that the manufacturers clearly thought would win over the wannabe baddie boys of our generation; and small, thin, white bits of plastic with pointed shards of graphite inside them, arranged in a neat queue, long enough to leave the front one dangling outside the hollow.

You write, and once the mini-pencil in use gets blunt, you simply take it out and use it to push the queue from behind. It moves forward and ejaculates half of the one in front now. Now we're back to square one. This continues until all the bits are blunted out, which is when you switch to a new set of pencilettes.
This pathbreaking invention also put the thousands of sharpener-manufacturers almost completely out of business. Vivid, stark images of Labour Union activities in front of sharpener factories; AK Hangal's face streaming into vision every now and then, referring to steel-sharpener-cut-pencil shavings as faulaad ki aulaad; and then, nightmares involving humongous dumpsters full of rejected sharpeners.

This also meant that we lost our daily stack of (often flower-shaped) pencil shavings - typically shoved down the neck of the guy in front to give him an itchy back all day - but small sacrifices are always required to win big battles. These pencils also deprived me of my daily wooden diet, but then, food tastes change with age.

As we stepped into Class V or thereabouts, the International Pencil Industry brought about another similar wood-free creation. This contained a hollow, filled with some very long, straight, very thin strips of graphite.You press a button at the back-end of the pen, and lo! Out came about five millimetres worth of sharp, writable, soft, grayness, ready for the user to write along.

This had to be sheer magic. Black grey magic.

Then, as the sultry Kolkata springs went past one by one, merging my childhood smoothly into adolescence, the Kolkata stationery market greeted me with "pen-pencils". They functioned exactly like the ball-point pens that seemed so adult: you put a bunch of long graphite needlish sticks inside them (you needed to buy them separately, of course), then with a gentle push from the top, one of the sticks stuck themselves out very slightly. You pushed once more, and it stuck out even more. You kept on pushing, and the needle will fall out eventually, making things all the more fun.

What took the icing, though, was not even the fact that these pencils looked very suave, unlike their floral-printed predecessors: they came with a perfumed eraser behind them. Life had finally turned a full cycle for the lover of the pencil with erasable posteriors.

Then, again, it was realisation time: the pencils were not as good as they seemed. Their slim sharpness were actually a hindrance if you tried to write fast: if you had jutted the ends out by a thousandth of a micron than the supposed cut-off, the edge would snap with a telltale phut; leaving you pressing the eraser violently again for the graphite to emerge again, thereby making you lose crucial seconds in your history test.
So their fate was decided: they were to be used only for drawing (by that I mean geometry, geography or science diagrams; not art: art required 2B, 4B... and 2H, 4H... pencils instead of the comfortable HB ones); and for writing the previous generation (by now their caps came equipped with erasers as well) served the purpose better. So I had to go to school equipped with two pencils and two kinds of graphite add-ons, thereby sealing it for both the sharpener and the eraser industry.

And then we migrated to pens: but that's another story.
Puked by Abhishek Mukherjee at 10:46