This is going to be a serious post. This does not narrate, barring a couple of exceptions, tales from my flimsy student days. This is corporate stuff, grown-up stuff, and hence demands respect of the minimum order.

Pencils and pens are history for me these days. I have moved on to bigger things. This post, however, will still adhere to the rules of not involving any mush (though my previous post contained the names of five of the most desired women in the history of womankind).

It began with some plastic packets.

In the winter of 1997 some freshly packed computers had arrived at The Department of Statistics, Presidency College, Kolkata, India. Ashim Shankar Nag (whose full name literally translates to The Infinite Snakes of Shiva), our illustrious professor, was in charge. After a few weeks of nothingness, we mustered enough courage to ask him "Sir, won't we get to use these?"

A bemused ASN asked back "do you know how much they cost?", and that was that.

Five years before this incident I had done a course on something mysterious and intriguing called BBC Micro where I could make an A (and even an অ) dance across the screen, performing all sorts of steps. My brief stint with keyboards had ended there. I had always cast suspicious glances at the cohorts of typists at Hazra, and just before Milieu 1997, our annual college fest, I had got something (possibly the schedules) "printed electronically" (don't ask).

We used to be fairly regular with our attendance in those unripe, innocent early college days. The nuances of college life, the lures of the common-room and canteen could not pollute our academic pursuits to a sufficient extent.

We were attending one of those Numerical Analysis classes involving a mysterious troop of Es and Δs. And then, breaking the barriers of the thick walls of the Department of Statistics, came a loud thak. A minute later came another thak. And this went on. A fifty-minute class, so roughly fifty thaks.

Next period. Fifty minutes. Roughly fifty more thaks. And so it went on.

Roughly five thousand thaks later we could not take it any more. We went to our college staff, Arunda, during one of those marathon, excruciatingly slow thak-thak sessions and asked.

"Oh, that. SG (Shankar Ghosh) is typing his PhD theses".

But SG was from another generation. We were members of Gen-X, rampant crusaders willing to take on Y2K by its horns. With a full computer lab at our disposal in Delhi, we simply ripped apart the laws our ancestors had set for us as far as sleeping and waking up early were concerned.

We chatted. We played games (trial versions) and got stuck when they asked for credit card numbers (some other websites did that too) just when things looked rosy. We emailed. We called our parents and friends (poor creatures, they never had any email access, they didn't even know what Telnet was) and had asked them to email us.

My mother had a tough time: If I sit at a computer in Kolkata and type something, how will it go to your computer in Delhi? How will they carry it?

Within a week I had figured out that if I had reached the end of a line while typing I did not need to hit Enter to go to the next line: it did that automatically. Ah, the wonders of a computer!

Soon the mysteries unveiled themselves, one by one. First came the two miraculous Shift keys (who uses the one at the right anyway?), with the knowledge that you need not press the Caps Lock key every time you needed to type a capital letter; then came the minuscule Ctrl keys (once again, the right one is the redundant one), banished to the furthermost corner of the keyboard - equipped with the most amazing combinations - Ctrl+c, Ctrl+v, Ctrl+x, Ctrl+b, Ctrl+i, Ctrl+u; then came the Tab, a formidable key just above the Caps Lock to help toggle from field to field in a form; then came the long, long Space Bar to tick check-boxes; Shift+Delete to become a virtual serial killer; Scroll Lock to confuse unmindful people using Microsoft Excel; the Insert key that I am the only known person to have put to some significant use; the inverted L-shaped huge Enter key which was born to be hit with all the power your finger muscles can muster; and the F11 key to go full screen, which I have never used intentionally till date.

But it still remained incomplete. Single keys or two-key combinations simply weren't cool enough. And then, as Windows 95 expanded its ominous wings to envelop my college days, we got to know of the magical combination that made our experience even more divine: Ctrl+Alt+Delete.

Using Windows 95 had never been as rosy.

As the flaming Delhi gulmohars gave way to the ancient Kolkata banyans, life on the keyboard did not change to a serious extent. Yes, we made serious progress: we had learnt to type our curriculum vitae on Microsoft Word, chat up people who were supposed to be Malaysian teenager girls and even do programming in C (with serious aid from that delightful book, Let Us C).

We appeared in campus interviews. We got jobs. We joined organisations. Our main food group, which had previously changed from wood juice to plastic ends of ball-point pens, now slowly modified into roughly fifteen cups of coffee a day. We also purchased huge, heavy, formidable-looking cellphones (my Nokia 5110 even had an antenna, and looked like a cordless phone). And we found that the keys were arranged the other way. We were never sure exactly why they worked that way, but they did, and we were not left with options.

For the first time, though, keypads could be used on the fly. You could be watching a Sooraj Barjatya movie and you could be texting someone that you were at a funeral (which, if you think about it, is not much of a lie: I have seen the Barjatyas arrange multiple funerals for the industry on screen).

Texting was fun, though: and I'm not talking about "c u l8r" messages here. I mean proper ones that shot up to over 160 characters, and then had to be trimmed down by removing a redundant comma here and replacing wonderful with good there and what not. It was a real-time challenge that took your linguistic abilities by the horn. It often ended up saving a rupee.

It was roughly at this time that I went on a maniacal spree of telling everyone who asked me to send an SMS the fact that an SMS is a service and you cannot send it. You can send a text message; a short message (an SM); but not an SMS.

Along came Ms Rowling with her use of texting (one needed to dial 62442 - MAGIC - to get into the Ministry of Magic), and we were all very happy. I also remember sending very expensive text messages to help Abhijeet Sawant become the first ever Indian Idol, and was sensible enough to stop at that.

By now, with Microsoft Excel dominating my life more and more I got to know of the wonders of technology - Shift+Space Bar, Ctrl+Space Bar and Ctrl+1. Philistines across the world still resorted to using the mouse to operate in Excel, but then, there will always be people who do not save the yolk of a sunny-side-up egg till the very end.

I even researched on the Pause-Break key, could not learn anything and gave up shortly. I did put the Print Screen key to good use, though: they were particularly essential in taking screenshots of Tomb Raider games and posting them to online forums, asking for ways out.

The latter was easy to manage. It was basically a smaller version of your usual computer keyboard: there was an undulation for every key, and texting became incredibly faster.

The touchscreen thing was a different story, altogether. I cannot, I repeat, cannot use a cellphone with a touchscreen keypad for the following reason: 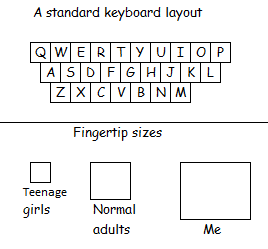 It simply doesn't work if you intend to type ABHISHEK and end up typing ASXAZBNJFHHJFHJJHIUHJJJ and then have to erase and rewrite it. Touchscreen keypads are, hence,  abominations, and the person behind the idea should be made to watch Neal 'n' Nikki in a loop. On a system where the Fast Forward, Pause, Stop and Close buttons can only be operated with the nose, and one wrong move would automatically imply a Rewind.
Puked by Abhishek Mukherjee at 17:32