Sir Isaac Newton, as we all know, was a remarkable person. Not only did he write the Philosophiæ Naturalis Principia Mathematica (which nobody I know has read), discover cool stuff like gravity and laws of motion, and, more importantly, invent his famous catflap, but he was also responsible for one of the most intriguing quotes I've ever heard. The story goes like this:

Newton had a dog, presumably a black one. It was called Diamond (for some reason this reminds me of Black Diamond Express). Diamond, irrespective of his whatever his virtues were, overturned a lamp (or a candle, or something equivalent) to set fire to Newton's research papers, which had taken twenty years to accumulate (and that was because they were complicated ones, not because our hero was a slow candidate). Not exactly what you classify under loyalty, but then, that's how sometimes our canine friends can behave like. Newton, the great man that he was, didn't resort to throwing a hawaii chappal (possibly for the lack of one) or utter swear-words (possibly because the choicest of them weren't invented by then, and then, calling the poor creature something like a son-of-a-bitch would probably have been a redundant piece of action). Instead, he uttered, rather Newtonically:
Oh, Diamond! Diamond! thou little knowest what mischief thou hast done! 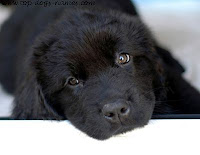 Rather captivating, his patience and temper management. What struck me was, who was the witness to this? Surely Newton didn't go about bragging to others about his incredible control over temper; and surely Diamond, however prodigal he may have been in finding a legendary master, was linguistically challenged to perform such an activity.

Then who was it? The search for this mysterious entity continues as we possibly come close to squash another urban legend, this time not quite one that I liked to do.
Puked by Abhishek Mukherjee at 21:33