I once had a mountain.

Not quite The Himalayas, but it was a mountain nevertheless. It was so dwarfish that most would call it a hillock, but to me it was a mountain. It stood quite proudly in front of me, and was high enough to make me go around it instead of just treading over it. It reminded me of the high classroom windows some schools had. I was afraid that someone might try to steal it, so I tried to hide it under my cot.

But it was too high. So I had to keep it outside. Then the inevitable happened. Someone stole it.
I was crestfallen. The mountain was the only possession I had, and parting with it meant a serious blow to me: a really serious one.
Time passed.
***

Then I had a river.

Not quite The Nile, but it was a river nevertheless. It was so small that most wouldn't even call it a brook, but to me it was a river. It flowed, it even wet my feet as I tried to tread across it. It was orangish, and looked like Gold Spot flowing merrily. I had learnt a lesson from last time, so I did hide it under my cot, meandering it as much as I could to hide it..
But it was too long. The cot couldn't hide its ends. Someone saw it. And, well, stole it.
The second blow was too much for me. First the mountain, then this? I mean, you crave to own something this much, and give it up, just like that? Just because you weren't capable enough to hide it efficiently from the world? Is that what you call justice?
Time passed.
***

Then I had a grassland.
Not quite The Steppes, but it was a grassland nevertheless. It was so small that it would hardly pass as a meadow, but to me it was a grassland. It wasn't even lush - the grass was sparse, and oddly reminded you of those small suburb fields where little girls ran as if their feet didn't touch the ground and they sold ghotigorom on summer evenings. I had to hide this under the cot this time, and even managed to do it somewhat.
But the insects gave me away. Someone followed the insects under the cot, and it happened again. It was nicked.
By now I should've learnt a lesson: I simply could not keep my precious stuff to myself. I wasn't capable enough. Perhaps I should've given up all hope of owning something that precious, that rare. Maybe things that special were elusive, after all.
Time passed.
***

Then I had a desert.
This time it was really a massive one, bigger than The Sahara. It was so huge that you couldn't even fly from from one end to the other, let alone drive; and walking was out of the question. It was humongous, imposing and, in a nut-shell, a quite imposing body.
I knew I had to hide this. It wasn't just another geographical structure -  it was a desert. As one of my favourite books has mentioned, "What makes the desert beautiful is that somewhere it hides a well." That's what makes deserts so special. And the fact that it had Abhishek written all over it made it the most special entity that had ever existed.
Then I realised that to keep the desert secured and own it to your satisfaction you cannot separate it from yourself. You need to stretch yourself beyond your limits, convert your limbs to tentacles and put a firm grip on it. Above all, you cannot afford detach yourself from it.
So I decided to step inside my desert. I knew this was suicidal, and once you walked a certain distance inside there was no way out - it was vast enough for a lifetime, or maybe even the entire timeline. But I had to own it, correct? What options did I have?
I walked in. And walked. And walked.
I know there is a well somewhere.
But where is it?
It's there, isn't it?
Please tell me I shall not lose my desert. Ever. If I do, I shall never be able to say "time passed" the way I did for the others: you need sand for the sandclocks, for the glass in watches and clocks, for the silicon chips in electronic devices to measure time. If I don't have a desert any more, time shall cease to pass. In fact, it shall cease to exist.
I need to own my desert, possibly even die walking on it, but then, all the water that I had stocked over the years is running out. Where is that well? WHERE IS THAT WELL? 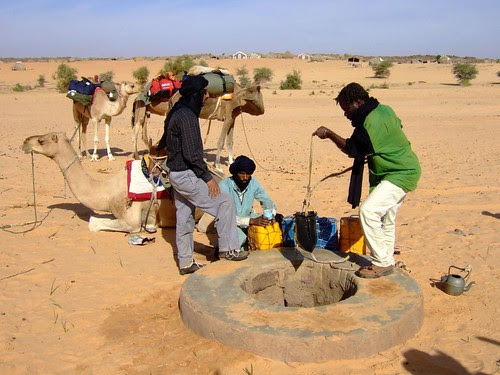 Puked by Abhishek Mukherjee at 23:23