Browsing through cricket scorecards is one of the things I live for doing (I wish I could do it for a living). This was in 2006: one of the first things I do every day is browse through the various match results on Cricinfo, and this was what I came across.

A man opens bowling for his side, takes 6/20 to bowl out the opposition for 103; comes out to bat in the third over, and remains unbeaten, scoring 259 not out out of 409; opens bowling again, and helps rout the opposition, taking 3/92; still not happy, scores a quickfire unbeaten 31 off 26 balls to secure the winning runs. I mean, there's got to be a limit to performances, correct?

That moment I knew I had to follow this guy.

A few months later we travelled to The Caribbeans for our worst world cup campaign in recent past. We had a practice match against Netherlands. We won by a comprehensive 182 runs, but the name on the scorecard that caught my eye was one that scored a 39-ball 31, and took 5 wickets including those of Sehwag, Ganguly, Yuvraj and Dhoni: what could've been better, against, well, a quite decent international side?

Let's bring some facts into the picture as well: 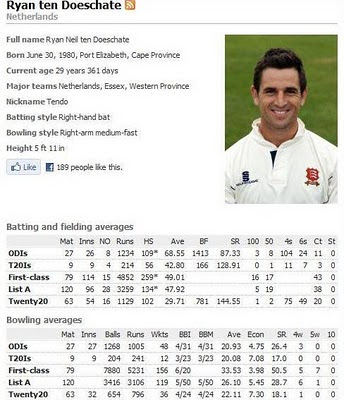 Fact 1: Among those who have scored a thousand ODI runs, the next highest averages belong to Hashim Amla (54.84) and Michael Bevan (53.58). Michael Hussey and MS Dhoni are the only others with a 50+ batting average. The difference in average might be a proof as to how good our man is.

Fact 2: Among those with a thousand ODI runs and a 40+ batting average, his strike rate is the seventh in the world. Viv Richards is at the top with 90.20. Sachin Tendulkar is at nine.

Fact 3: Among those with 40 ODI wickets his average is eighth-best in history. If we consider the fact that the frequency of big scores has gone up significantly over the past five years and restrict the list only to bowlers who have played after 2005, he ranks third after Ajantha Mendis and Shane Bond.

Fact 4: The difference between his batting and bowling averages is an unbelievable 47.62. This is a phenomenal statistic, given that most all-time great all-rounders struggle to keep this difference over ten. Kallis, for example, averages 45.73 with the bat and 32.06 with the ball as I write this - so basically a difference of 13.67.

I know that being from a minor side, most of his accomplishments have been against minor sides. But then, try improving on those numbers playing against your son in your balcony, and you'd do a good job. And then, whenever he has got a chance to play a major side he has done well. For example, his all-round job against India in the world cup practice match; a defying 57 (out of a team score of 132) against Pollock, Nel and Langeveldt; wickets of Ponting and Hussey in a world cup match; and his 2/35 and match-finishing 22 not out to eliminate England from the 2009 T20 World Cup.

Mind you, his first-class (mostly for Essex) average of 49.01 with the bat and 33.53 with the ball puts him on top, with the very best. The difference of 15.48 is quite impressive for someone without serious international exposure. Ian Botham, for example, had a difference of 6.75, and Imran Khan had 14.47. This, being mostly in the English county circuit, means that he had to lock horns with the best names in the world.

He's good, guys. Keep an eye on him. He shall go places, possibly unheard of.
Puked by Abhishek Mukherjee at 21:30

Email ThisBlogThis!Share to TwitterShare to FacebookShare to Pinterest
Tags: Cricket