Uderzo’s loss is personal. Very, very personal. Goscinny had passed away three-and-a-half months after I was born, so to me he was always someone from the past.

I was not even eight when I came across my first Asterix strip, Asterix in Switzerland. I got bored after the first few pages. If anything, they put me off Asterix for a few years.

The fault was entirely mine. The jokes were too advanced for my age, the illustrations not as simple as Herge’s. This is precisely why, when asked for advice, I instruct parents to not introduce their children to Asterix till they turn at least fifteen.

I returned to Asterix after another eight or nine years, just after my board exams. The first book I borrowed from a library was Switzerland.

By then I had some knowledge, but more importantly, I could appreciate humour better than I used to. Apart from the jokes, the diagrams, the expressions – they all started to make sense to me.

Like cricket, Asterix has been one of my perennial go-tos over time, to celebrate, to smile, to laugh out loud, to relax – and in those seemingly endless phases of gloom.

I am no authority on art, though even I can figure out the difference between the early Asterix drawings (Gaul, Golden Sickle) and the later ones.

I suppose the best I can do is to chronicle my favourite visual memories, for this should be about Uderzo. The list could run into thousands, so I shall try to keep things brief – and restrict myself to only visual humour, thereby compromising on wordplays and references. Even then, there is a lot.

I should start with some facts about Uderzo. He was, as is common knowledge now, colour-blind in his early days.

Uderzo told Christian Philippsen in a 1985 interview: “The effect was disastrous! One day I drew a field with some coloured pencils, and my mother said, ‘but why have you made the grass red’?” Since then fortunately my eye has improved, and on the cover of Asterix books, Asterix’s red trousers and the green grass that surrounds him are all my own.”

During World War II, Albert’s brother Bruno somehow managed false papers and left Paris for Brittany (Armorica in the Roman era). Years later, when Goscinny asked Uderzo to choose the location of the village (the only restriction was proximity to the sea), Uderzo chose Brittany.

Before Asterix, Goscinny and Uderzo collaborated for a strip called Oumpah-Pah, set in 18th-century North America. The protagonist was a “large, naïve gentle warrior”. He also had a “sophisticated” partner in crime, Hubert de la Pate Feuilletee.

What was Oumpah-Pah like? Let me quote Peter Kessler from The Complete Guide to Asterix: “The humour, style and situations in this series were very ‘Asterixian,’ with bands of undisciplined, rowdy Indians overcoming the ordered ranks of their invaders.”

Asterix obviously changed the fortunes of Goscinny and Uderzo. Over time Uderzo developed a basic hobby, of collecting Ferraris, Jaguars, and Lamborghinis.

Goscinny died in 1977 after writing Belgium but before Uderzo had started drawing them.

Most of the characters were still work in progress in Asterix the Gaul. They even varied in nature from later versions. For example, Obelix used to eat the same as everyone else, Getafix lived in what looks like a cave, but more significantly – the villagers actually invited Cacofonix to sing.

However, as early as page 1, panel 2 did Goscinny and Uderzo tell us what it is going to be about. 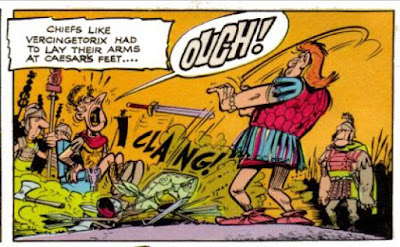 Vercingetorix was a chieftain who led Gaul against Caesar during the Gallic Wars. After the Battle of Alesia, he was left to choose between saving his countrymen and escaping. He chose the former and surrendered himself to the Romans. He was imprisoned and killed, and is hailed as a hero over two thousand years later.

Now see what Goscinny and Uderzo reduced the speech to. Do note the ease with which Uderzo swapped the stature of the victor and the vanquished – all in one frame – without altering the actual outcome.

Also note how Uderzo drew Caesar here. By the end of the book (and throughout the series) Caesar looked entirely different.

The shield finds multiple references in Chieftain’s Shield, as does Alesia. 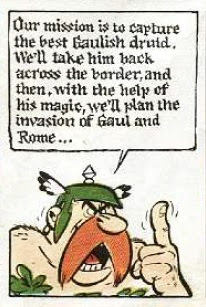 Moving on to Goths now. The Goths obviously talk in the font Letter Gothic. As we shall see, Uderzo had a habit of getting the most out of speech bubbles.

Note that Uderzo’s Goths wear the pickelhaube, a helmet with a spike in the middle. This was used by the 19th- and the early 20th- century Prussian and German police and army.

He could easily have used the Gestapo attire or a World War II helmet for the Goths. That would have been more recognisable.

But France participated in the War as well, and did not come off very well. “A World War Two helmet would have been too close. In France, it’s an image people try to forget – we don’t like to be reminded of our defeats,” Uderzo later told Kessler. 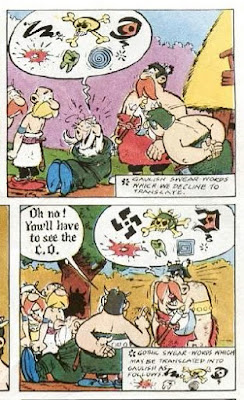 The speech bubble, yet again. Self-explanatory and brilliant, and so, so, so simple.

Since we are on to Goths, I have to refer to the Magdeburg Hemispheres joke – one of many jokes where you need some knowledge to comprehend. However, it was not a visual joke, so I shall leave it out…

Gladiator, of course, features the most iconic scene from Ben-Hur. 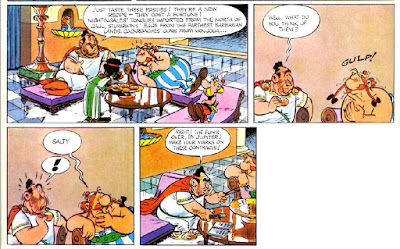 Uderzo could simply have got Obelix to say “salty.” or “salty!”. But no, he removed the punctuation mark for added effect. 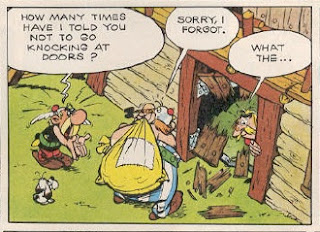 If you have to take a tour around France (Banquet), surely you will choose the Tour de France logo?

They could easily have charged British Petroleum for the honour! 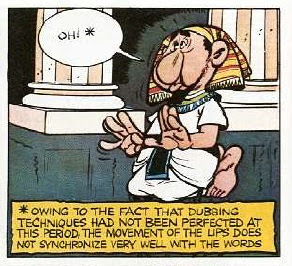 Cleopatra lives up to its self-proclaimed reputation of “The Greatest Story Ever Drawn”. That is partly because some of the panels are bizarrely singular. Some of the experiments really came off.

Edifis is a terrible architect, but why does he write his name in Greek? Is it because we cannot read proper nouns in hieroglyphics unless it is something as beautiful as Ptenisnet? 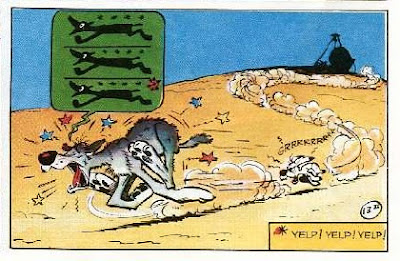 Because, well, Egyptian dogs also communicate in hieroglyphics. The hieroglyphics speech bubbles continue throughout the book, then spill over to Legionary.

Lost – but only slightly – in the interpreter’s translation. Uderzo magic.

This triggers the most famous chain of events in the history of Asterix.

How does one come up with such ideas? 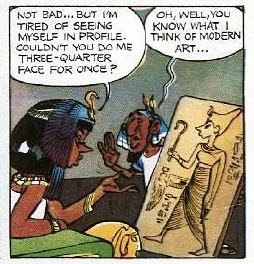 Staying true to the painter’s quote, throughout the series has Uderzo illustrated Egyptians (not prominent characters like Ptenisnet or Cleopatra) in the profile.

Nothing deep here, but Obelix’s expression is priceless. Even Asterix notices. 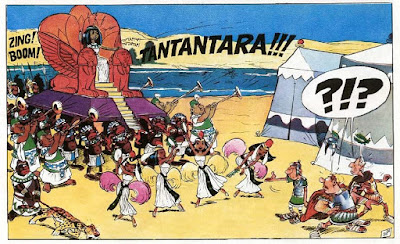 Step aside, Elizabeth Taylor. She might not resemble you, but that nose! 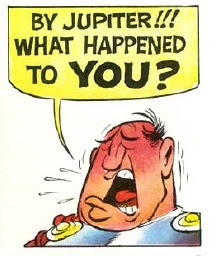 Big Fight starts with a big hello to Mussolini. 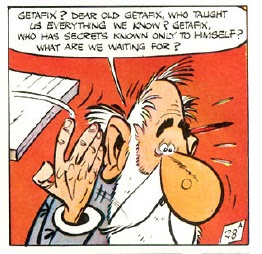 I am sure of the fact that Uderzo based Psychoanalytix, the psychiatrist, on Freud. The eyes are definitely reminiscent.

Remember the owl who never deserted the soldier? Uderzo did not leave him out of the climax, too. 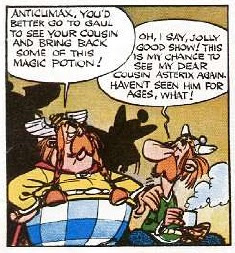 I think the chieftain (left) from Britain is based on Churchill. The moustache makes me unsure. 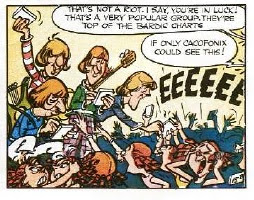 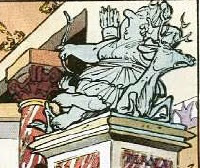 A homage that I had no clue about till the internet era. Google with Diana of the Hunt. Of course, Diana is larger here. Her hunting method, too, is somewhat different. 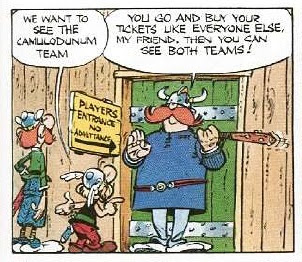 The uniform has not changed much in London, no?

In Normans, Justforkix rides a chariot made in Milan. Of course it is a Ferrari! I am sure Ferrari comes in other colours too, but still…

to be continued...
Puked by Abhishek Mukherjee at 23:58