I have tried to demonstrate examples of Uderzo’s brilliance in Parts 1 and 2. I will now resume, from Obelix and Co., in what I expect to be the last installment of the series. 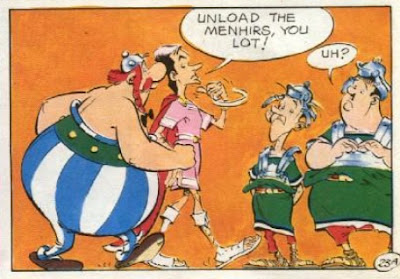 Obelix and Co. boasts of satire of the highest order, though that has more to do with the theme than the art. Not sure what Laurel and Hardy were doing here, though. 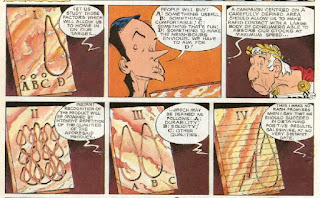 Tablets, paper, PPT, you, me, Julius Caesar – presentations are the same. They have always been. The glassy-eyed look is too familiar.

Caius Preposterus is Jacques Chirac, by the way. At that point Chirac was Prime Minister. He later became President of France (the state head). 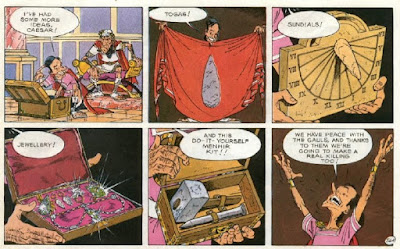 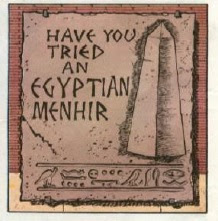 Obelix was named after obelisks, so an obelisk-shaped menhir is payback of sorts.

This one is quite famous. 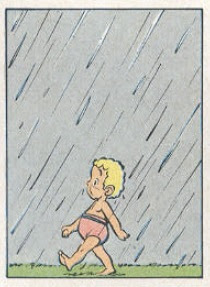 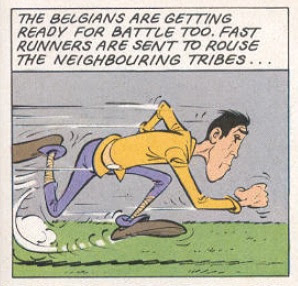 This unusual posture always intrigued me. I assumed this was a famous runner, but I kept hitting dead ends. That was because he is Eddy Merckx, a legendary Belgian cyclist – a sport I have never followed. The posture should have been a giveaway, though.

This is Ernest Meissonier’s Napoleon in the Campaign of France. 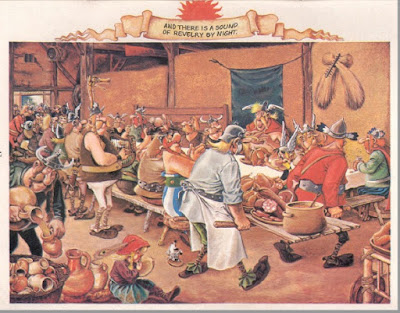 Goscinny passed away after writing Belgium, though before Uderzo finished the drawings. Uderzo changed the weather in the comic at this point, and we see only rain and/or gloomy sky thereafter. I think (but am not sure) that this is the specific point.

This tribute in the last panel makes me as sad as the rabbit.

Uderzo took over as writer at this stage. While the characters and mood remained the same, he stepped outside Goscinny’s world to add supernatural aspects.

Till now we had only seen Getafix’s potions and inventions (the acorn from Mansions of the Gods, for example), but Uderzo gave us creatures: flies, dragons, aliens, and everything in Atlantis.

Some of Uderzo’s puns make you groan, so I suppose they fit the bill. However, tempted as I am to reproduce the text jokes and references, once again shall I restrict myself to the visuals.

Romeo and Juliet is obviously a source of inspiration in Great Divide. This is my favourite panel.

One of my most favourite concepts in the entire series. Cleverdix and Majestix, the two rival chieftains at loggerheads with each other, wore trousers with horizontal and vertical stripes respectively. Once they made up, they started wearing chequered trousers to mark the truce. 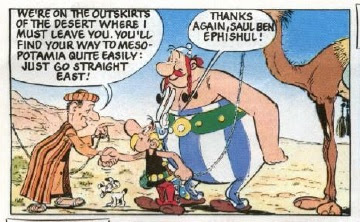 The Israel government had requested Goscinny and Uderzo many times to visit the country and base an Asterix adventure there, but Goscinny’s Jewish origin made him uncomfortable.

Uderzo finally sent Asterix to Israel, in Black Gold (“it is the one adventure that was easier for me to write than for him”). He also paid a double tribute to Goscinny. Not only did he dedicate the book to his friend and colleague, he also conjured a significant character – Saul Ben Ephishul – based on him.

By the way, Magic Carpet features a character called Iznogoud, a tribute to an earlier strip by Goscinny (with Jean Tabary, not Uderzo). 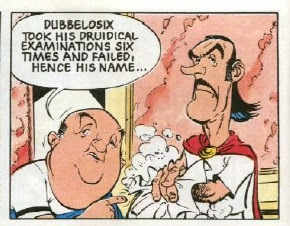 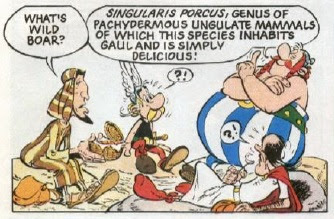 Forget what he says, the sheer look on Obelix’s face is worth the price of the comic. 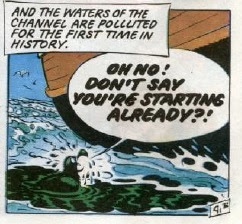 This refers to (I think) the 1978 Amoco Cadiz oil spill, five kilometres from the coast of Brittany (remember, that is where our Gaulish village is supposed to be).

The book came out in 1981, and there were three major spills between 1978 and 1979, but the other two were in Mexico and Trinidad. The scene was even more relevant to people like us who read it in the early 1990s. 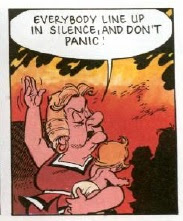 This panel, from Son, still gives me goosebumps. A calm, confident Impedimenta taking charge as the village is being reduced to ashes in the background.

One of the best jokes of the series, from Magic Carpet – not because of the art but the concept. I know everyone has got this one, but I shall still explain it.

Ancient Rome did not know the use of zero, so how is Asterix aware of it?  Because this was in India! 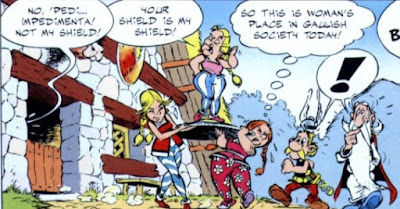 Whether Secret Weapon worked as a take on feminism is debatable, but this frame has stood the test of time.

This is the controversial scene for Uderzo copped some flak. A Montreal journalist alerted that the punch might lead to an increase in domestic violence. The journalist’s daughter, on the other hand, thought that she had been overreacting.

In the story, Asterix pleaded guilty and was sentenced to temporary exile to the forest (there was no prison in the village). 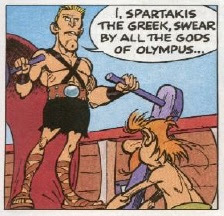 Kirk Douglas features in All at Sea, in case anyone has not figured it out.

The expressions, on all seven, are priceless. Asterix and Getafix sink into despair as Obelix turns into granite, but look at the other four – and I am not even getting into the puns!

Our favourite household is back to two bachelors, then. 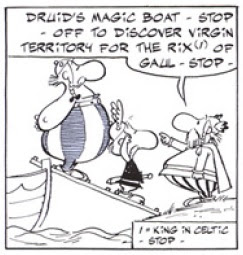 Uderzo responds to a few readers’ complaints in Asterix As You Have Never Seen Before, one of several pieces in Class Act. The styles imitate other comic strips, but I am too lazy to reproduce all of them. I have the energy for just one: Peanuts. 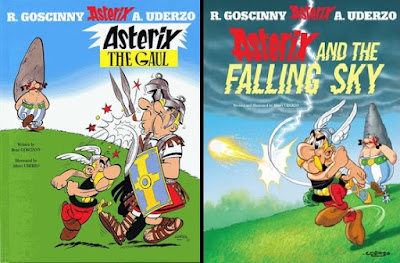 This is why there were speculations that Falling Sky might be the last of the series. 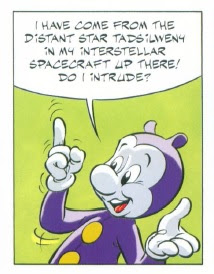 Given that Toon is based on Mickey Mouse, Tadsilweny is too obvious an anagram (Uderzo even explains it in the end). He also uses Hubs for Bush, Nagma and Gmana for Manga, etc.) 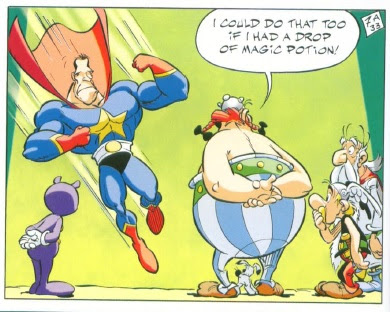 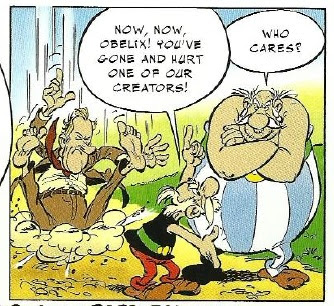 It is the year 1 AD (The Golden Book). Uderzo decides to show up and reveal his identity to a grumpy, ageing Obelix. The response is not quite peaceful.

Uderzo signed off with The Golden Book, so I shall not deal with subsequent Asterix books. Twelve Tasks was illustrated by Marcel, a brother of Albert Uderzo. Marcel had collaborated with Albert for some of the earlier Asterix books.

Fin.
Puked by Abhishek Mukherjee at 14:11