I have already discussed some examples of Uderzo’s brilliance in Part 1. I had covered till Asterix and the Normans. I shall now begin with Asterix the Legionary. 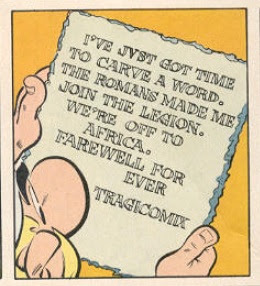 The Roman alphabet does not have a U.
PS: Legionary is among my favourites. Underrated, if you ask me. 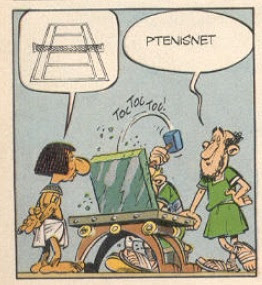 Asterix fans usually fall in love with Ptenisnet right from the moment he announces his name. His hieroglyphics and expressions have both contributed towards his cult following. 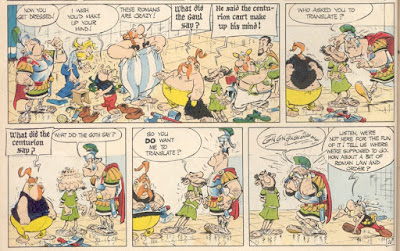 With people of so many nationalities, translation jokes are rampant in Legionary. Uderzo has a blast depicting the expressions.

One of my favourite panels. The hair of the Belgian (third from left) is a homage to the most famous Belgian in the world of comics. For some reason this is not as well-known as Thomson and Thompson in Belgium.

I do not know what I would have done without the internet. This is a parody of The Raft of the Medusa (Google it) by Jean-Louis Andre Theodore Gericault. In fact, I failed to get it despite Uderzo leaving a hint on Gericault’s surname (Jericho) in this panel. 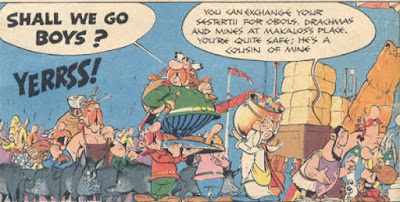 Moving on to Olympic Games now, which came out the same year as the Tokyo Olympics (yes, yes, I know). The font is apt, but we have seen that before in Legionary. 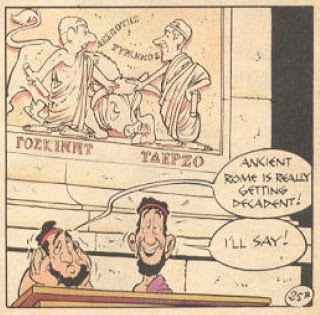 One of my favourites. Uderzo has drawn Goscinny and himself (the carved figures, not the humans below them), written the names, and made them call each other despotes and tyrannos. You can guess the English translations. 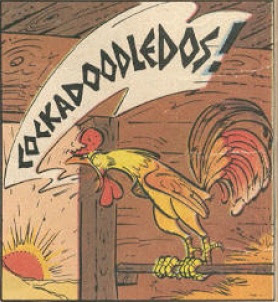 Not for the first time does a non-human speak a local human language. 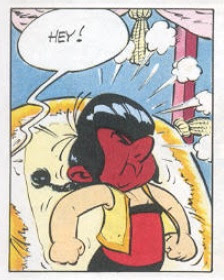 Pepe! Despite the aurochs in the climax, despite the inverted ?s and !s, Pepe and his expressions (and colours) played the most important role in making Spain what it is. 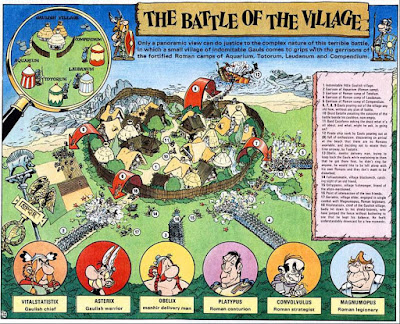 Even if one ignores the green speech bubbles of Roman Agent, this scene definitely deserves a mention.

Here is one for the trivia buffs: what, indeed, is the black stain that is mentioned in this panel but is never discussed again?

Uderzo was initially vague on this when confronted by Kessler: “No, it’s a stain, a deliberate stain…”

Kessler, however, theorised that Uderzo probably drew it around previously spilled ink. When he kept pressing, Uderzo responded with “well, if you prefer that version you can put it in the book”.

Lovely little homage. You are changing wheels, after all. 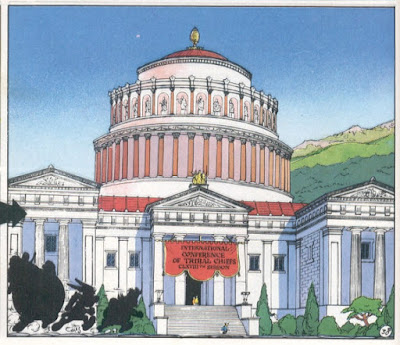 Yet another one the internet told me about. This is a Romanised version of the UN Headquarters, Geneva (the other Headquarters are in New York City). 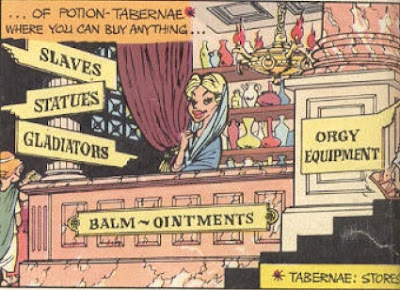 Roman chemists need to make a comeback for the sheer variety of their inventory. 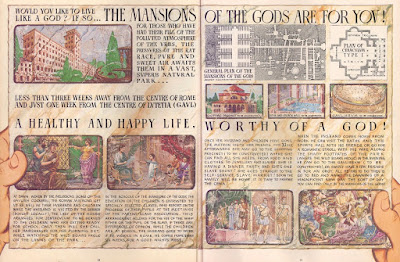 This brochure offset the page count in Mansions of the Gods, so they could not accommodate that “A Few of the Gauls” page. 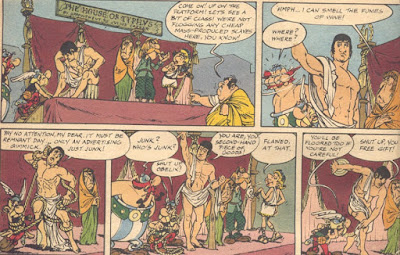 Page 16. Check the male slave in panels 1, 3, and 5. These are reproductions of The Thinker (by Auguste Rodin), The Laocoon (by Polydoros and Athanadoros), and The Discus Thrower (by Myron). Another outcome of spending countless hours researching Asterix on the internet.

Asterix buffs will tell you about Page 14, Panel 3 of Laurel Wreath – the first instance of topless women featuring in an Asterix comics (I will not be providing that here). This is hardly surprising. Laurel Wreath deals with adult themes (slavery, for example). Definitely not a children’s book.

I am getting repetitive, but had there been no internet, I would not have been able to appreciate the greatness of Uderzo. This scene from Soothsayer is Rembrandt’s The Anatomy Lesson of Dr Nicholaes Tulip. 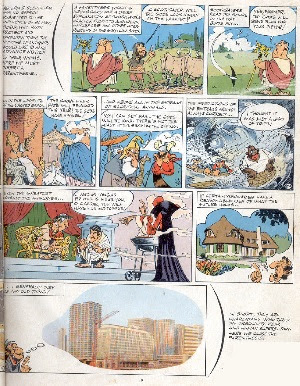 The contents of an entire page within parentheses. Enough said. 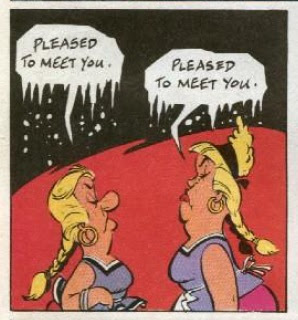 You can almost hear this frosty conversation from Caesar’s Gift. 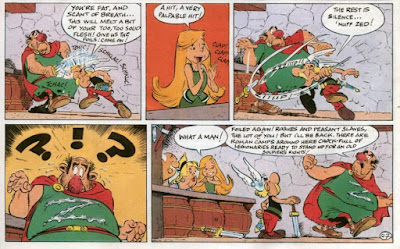 Goscinny sets this up with Three Hamlet quotes and a pun. Uderzo draws the Z. The Mask of Zorro (the movie) was obviously not yet made, but Johnston McCulley’s character and his Z were quite famous.

The love story that deserves more recognition. The bird was confused when the helmet had dropped nearby the first time. Now it is in love.

A personal favourite for no reason. A “comfort panel”, I suppose. 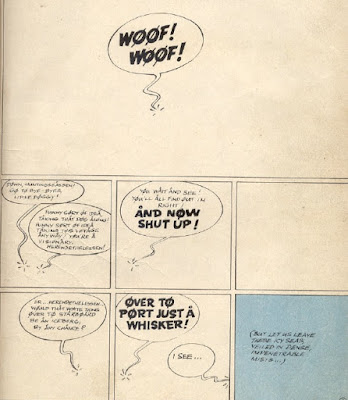 Probably the most Uderzo thing ever. We have seen this some panels in Britain and Switzerland (all-black panels with only speech bubbles), but to dedicate an entire page – that too the opening page – is something else. 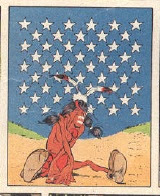 They cross the Atlantic in Great Crossing, so there are more American jokes here than anywhere else. Unfortunately, Asterix never took off in the USA the way it did in Europe. The fact that Roman history does not form part of the curriculum might have had to do with that.

Remember that the Vikings reached America centuries before Columbus, a fact unearthed as late as in 1960, so they have got it right.

One of many American panels: the aftereffect of being thrashed by Obelix. 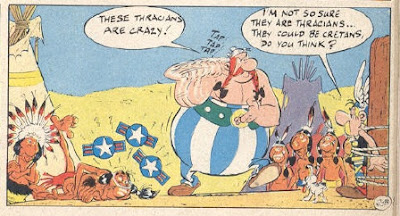 Not only stars, they also see the US Air Force insignia. 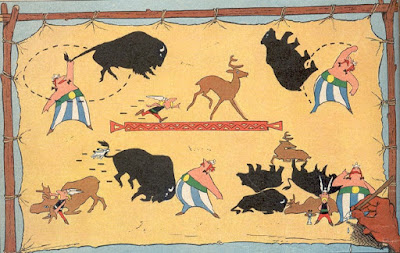 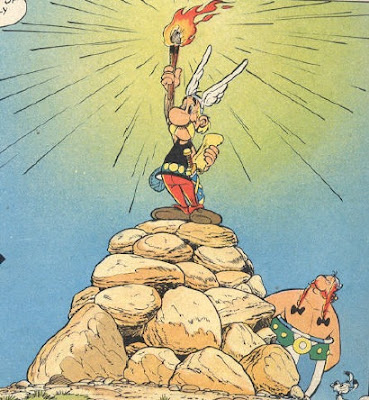 I am not explaining this. 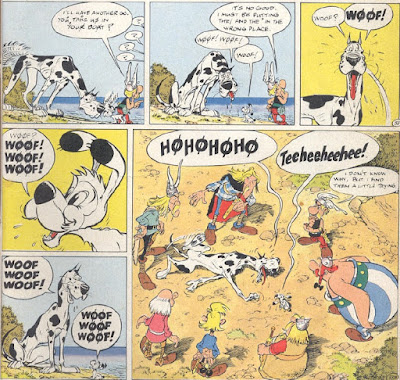 Some pages belong to Goscinny. This one is entirely Uderzo’s.

To be continued...
Puked by Abhishek Mukherjee at 00:00