A day of contrasts 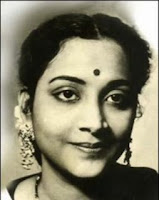 There was something in Geeta Dutt's voice that used to give me goosebumps at a very young age, and that hasn't changed as of now. Waqt ne kiya still haunts me; meri jaan mujhe jaan na kaho still gives me that empty feeling; jaane kya tune kahi still sends that familiar tingling down my spine; and ae dil mujhe bata de still remains one of the most sweetly sung melodies ever. I've always known that though Lataji was the undisputed queen of Bollywood playback, Geeta's voice was my personal favourite.

While growing up I came to know more of her; the fact that she was a Bengali; that she was married to the greatest director Bollywood has ever produced; and that the man had got romantically involved with one of the leading actresses of the era; and that Geeta couldn't handle the emotional pressure, and had taken to alcohol and sedatives; and that she died of cirrhosis of liver as a result in 1972.

The highest point of his career, in my opinion, came during the 1981 Ashes during the Headingley test - in the opinion of many the greatest test of all-time. Australia had amassed 401 and then bowled out England for 174; following on, England were 6/1 at stumps on day three.

On the fourth day they were 135/7, still requiring 92 to save an innings defeat when Dilley joined Botham. Botham, as folklore goes, had walked up to Dilley and said "let's give it some humpty".

Dilley scored 56 off 75; Old 29 off 31; and Botham remained unbeaten, with Willis for company, at stumps, with England 351/9. England were finally bowled out for 356 the next morning, Botham remaining unbeaten at 149 off 148, 114 of those runs scored in boundaries. Bob Willis took 8/43, and Australia slumped to an astonishing 19-run defeat. Willis and Dilley were hailed as heroes, but the test shall always be remembered as Botham's test, for his unbelievable display of aggressive batting on day four.

No, I'm not insane. There's a reason why I've mentioned an Indian playback singer and a British all-rounder on the same day. Geeta had fought against the oddities of life, couldn't take it after a while and had ultimately succumbed to the pressure. Botham chose to fight as well, and came out victorious in an Ashes test, the biggest stage test cricket has ever produced. Their efforts had opposite effects - and yet, they had both chosen 20th July for the climax: Geeta for her death, Botham for his innings.

In between these two incidents, on this very day in 1977... well, let's not get started on that.
Puked by Abhishek Mukherjee at 18:51