Five on a roll 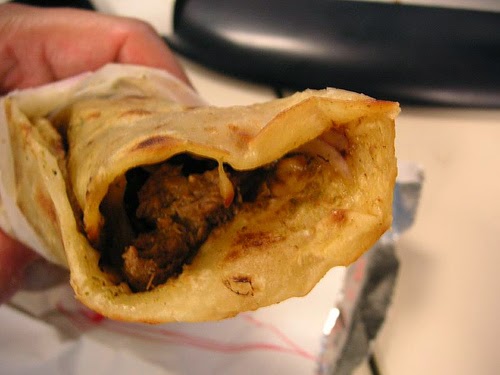 Rolls. Without any kind of doubt the bestest street food that has ever existed. For the uninitiated (I presume there are some non-Kolkatans reading this blog as well), I mean kati roll - the kind of divine creation made possible only by stuffing greasy kababs inside a porota (paratha in Hindi and most North and West Indian languages, fried Indian flat-bread or something equally hideous in English), often garnished with onion strips, green chilli bits or squeezed juice from half a lemon, or marred by smearing the insides with chilli, tomato or soya sauces or cucumber. These days some eateries have been promoting jaali rolls, replacing porotas with rumalis or naans and the oily feel of the kababs with grilled chicken or other sissy stuff. But then, blasphemy is everywhere, isn't it?

If you're still wondering on what this seemingly useless article is about, it's an honest effort at creating a list of top five rollerias in my city. And when it's about my city, it's serious business, since Kolkata is the birthplace of rolls, and undoubtedly produces the best rolls in the world. So there's a high possibility that you're getting a list of the best production centres of the best street food in the entire world.

It also serves another purpose: now that I'm on a very strict (somewhat self-imposed) diet regime, I'm off rolls for some time now; writing this article gives me a chance to take a stroll down all kinds of intricate memory lanes, as well as having a somewhat virtual bite at the greatest street food ever created in the illustrious history of mankind. 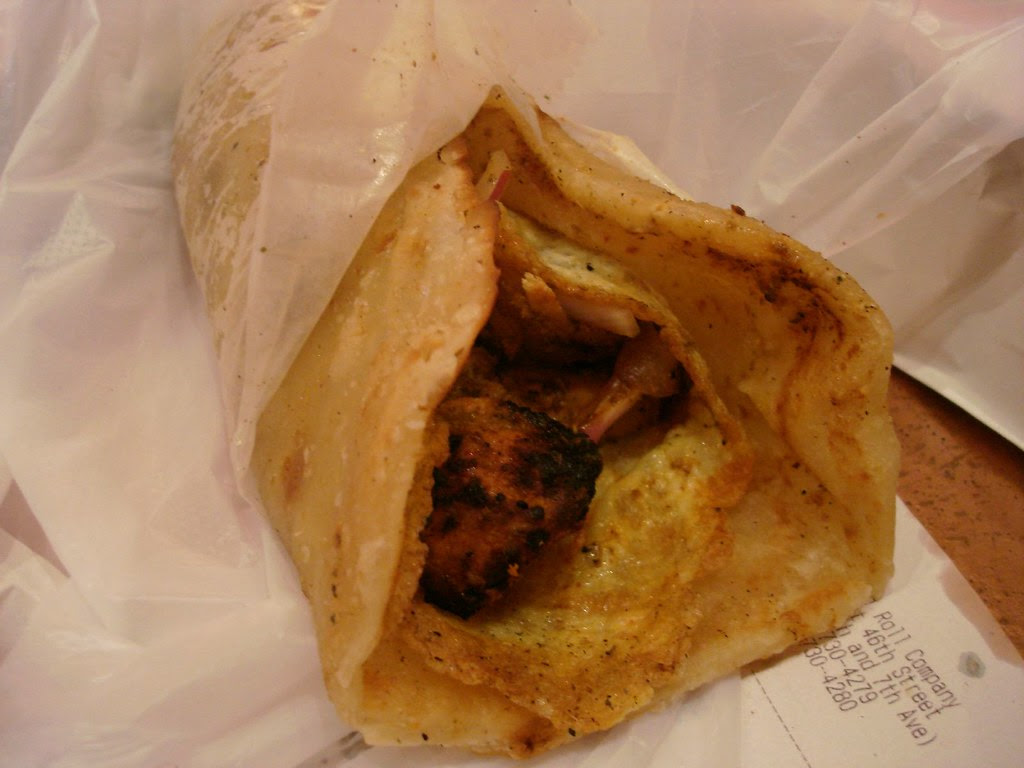 Picture this. You're in college. You're craving for some B-grade flick that is bound to show some, but not much, female flesh. You've braved the sun and have loitered across Esplanade and Lindsey; you've tried to strike a bargain with the second-hand audio cassette hawkers on Free School Street, and have probably bought a couple, thereby spending a chunk of your pocket-money; you've got tickets for the cinema, and all you know that you're incredibly hungry. What do you do?

You enter Khalique. Well, actually you don't even enter Khalique - you just stand outside it. You can see the tawa, with six-inch rolls aligned along the circumference. They're fresh, they're hot, they're delicious, they're full of beef, and in the 1990s, they cost, well, I'm not lying... three rupees each. Three. To put things into proper perspective, the cheapest metro railway ticket cost four rupees at that point of time. 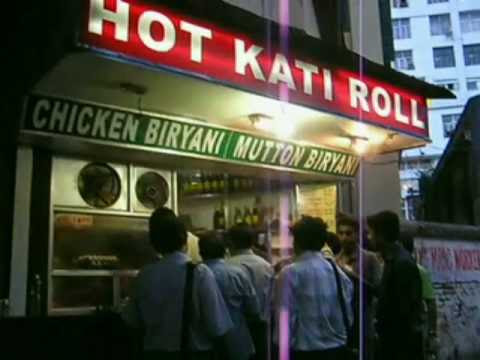 Class XI was when I had started considering myself as a grown-up. I took the metro and visited, well, Park Street, the land of dreams, the land where grown-ups went out to eat. My pockets, however, didn't agree to my dreams, and I had accepted the fact that I shall return desolate, dejected, heartbroken.

It was when I had had travelled till St Xavier's and was on my way back to the metro station past all the illustrious names every Kolkatan has grown up with that I noticed this small street-side shop. There was a man seated in a box some three feet above ground level, dishing out incredibly delicious rolls: not your cucumber-filled tosh, but the real thing that began and ended with dark brown chunks of meat. Every bite was exotic; and the for the first time on that avenue of heaven that my pockets didn't revolt. 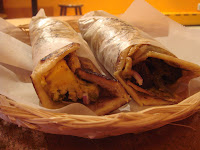 If you do not know where Traders' Assembly is (given that you stay in Kolkata, and you have grown up listening to that jingle), well, it's diagonally opposite to Anandamela. Now, from Traders' Assembly, this abode is about ten seconds on foot towards Ballygunge Phnari.

They used to sell a plate of fried rice and chilli chicken for (hold your breath) fifteen rupees; this was ten years back. But this is not about pricing: this is attributes more divine.

The first aspect of Bedouin that might strike you is the speed. They grill porotas over tawas at an incredible speed, then they lay them in three columns. Each column has approximately eight porotas, about 70% of each of the bottom seven porotas covered by the one on top of it. Next, the fillings (chicken, mutton, egg, paneer, potato, crushed tikiya, you name it) are spread linearly and systematically on the open portion in one fluid motion per unique filling. The expert hand then dishes out an equal amount of minuscule green chilli pieces and squeezes half-lemons to extract juice on the porotas. The rolls are then, well, rolled up (hence the name), covered in translucent rectangular pieces of paper, drafted inside brown-paper packets with half a lemon and a single green chilli, and distributed, without any error whatsoever, to the correct customer, and his change (for whatever amount possible) being reimbursed without any fuss. The time taken is usually ten minutes for twenty-five rolls, which, at the rate of a roll ever twenty-four seconds, is something that McDonald's, with all it's gargantuan task force, has never been able to match.

This was a tough choice, but in the end, I had to push Nizams down to the second slot, not because it has gone down in quality, but for the simple reason that the crown now belongs to someone else for absolute superiority.

Nizams, however, outshines every other rolleria in terms of heritage. The history is mind-blowing. Consider, for instance, the fact that this is where rolls were born. Office-goers wanted a quick, portable, delicious solution to their hunger, and Nizams came to their rescue. You got stuffed, you got satisfied, you got it in minutes, you could carry it in one hand and have it on your way, and though you never used any cutlery your hands didn't get greasy. The genius of Nizams had arrived; and they did so way before Independence.

And what taste! True, they are smaller than most rolls in the city; or they seem so, since they get gobbled up too easily. Nizams usually make their kababs a bit crisper than most rollerias, but the oily nature of the end-product doesn't kill the flavour or the taste; if anything, it contributes towards making the roll more divine. 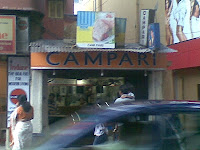 Bang opposite the Gariahat Bata there is a road; I suppose the address is Dover Lane, though I'm not sure. It's the one next to Basanti Devi College. The shop at the corner is called Adi Dhakeshwari Bastralaya New Amrita Bastralaya. You take about twenty steps inside the road, and to the left you see the picture of a rooster. That's the place you're headed for. Though on Dover Lane, the postal address reads 155B Rash Behari Avenue.

Campari doesn't have a door. It has only shutters. You enter. You place your order. You perch yourself on chairs in front of high bar-counter-like tables. Someone at the counter shouts that your order is ready. You walk up. You fetch the roll. It's highly likely that you won't be able to resist the first bite before you reach your table. You take the bite. Your eyes close automatically. You let the aroma, the flavour, the taste, the magic melt in your mouth.

The pieces, chicken or mutton, are of the best quality. They are of exactly the correct size. It's never overcooked, and it's never rare either. There's not a single speck of air inside the roll: nor do they try to fill up the gaps with cucumbers or filthy sauces. It's meat, meat and only meat. The precision of the cooking can only be matched by the mass of meat they put in per cubic inch of space inside the roll.

The porota is cooked to perfection. It's exactly as crisp as you want it to be: they do it with pinpoint accuracy - the flour is never left raw, and neither does a square millimetre of it get charred. It's like a surgeon performing a brain operation - everything is exactly the way you want it to be. Always.

The king is here to rule.

PS: I tried my level best to insert a pun on the lines of "it rocks; it even rolls", but everywhere I tried to put it, it seems unbelievably forced. I had to use it, though, so I inserted a PS just for the sake of it.

Puked by Abhishek Mukherjee at 00:05